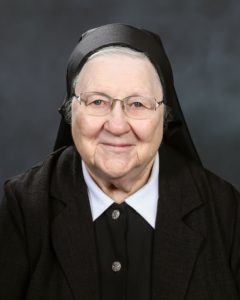 The Eucharist of Christian Burial will be celebrated at 10:30 a.m. on Monday, October 31, 2022, at the Sacred Heart Chapel, Saint Benedict’s Monastery, St. Joseph, Minn., for Sister Herman (Stella) Tschida, who died peacefully at Saint Scholastica Convent, St. Cloud, Minn., on October 22, 2022. Burial will be in the monastery cemetery. Funeral arrangements have been entrusted to Benson Funeral Home. Friends may call at Saint Scholastica Convent on Sunday, October 30, for a Prayer Service at 3 p.m. followed by visitation until 4:15 p.m., or for a Vigil Prayer Service at 7:30 p.m. at Saint Benedict’s Monastery. Visitation continues at 9 a.m. until the time of the funeral on Monday, October 31.

Stella Tschida was born November 15, 1926, to Herman and Mary (Zinniel) Tschida in Freeport, Minn., the fourth of their six children. She attended public school district #94 in Freeport and received her GED from St. Cloud Technical High School, St. Cloud. She participated in workshops at the College of Saint Benedict, St. Joseph, Minn., completed a correspondence program through the University of Florida, and was certified as a food service supervisor.

Following experience assisting in the kitchens at Saint Benedict’s Monastery and at St. Benedict’s Hospital, Ogden, Utah, Stella heard a call to religious life and entered Saint Benedict’s Monastery on October 29, 1950. She was received into the novitiate June 20, 1951, as Sister Herman, made first monastic profession July 11, 1952, and perpetual monastic profession on July 11, 1955. In 2002, she celebrated her Golden Jubilee and in 2012, her 60th anniversary of profession.

The domestic arts were S. Herman’s specialty. She was an excellent cook and homemaker and used these gifts to the full in her assignments. These included: Saint Benedict’s Monastery; St. Joseph’s Home and St. Raphael’s Home in St. Cloud; Anaconda, Mont.; St. Martin. Minn.; Sauk Centre, Minn.; Pierz, Minn.; and at Zardetti Convent and St. Cloud Hospital Convent in St. Cloud.

In 1999, S. Herman moved back to Saint Benedict’s Monastery where she worked as an artisan embroidering towels for the Whitby Gift Shop and was involved in community services, including sewing for the sisters and responding to requests for batches of her famous fudge. In 2017, she moved to Saint Scholastica Convent where she continued to serve as an artisan for Whitby and Saint Scholastica Convent’s gift shops and undertook a ministry of prayer and community living.

Herman is survived by her Benedictine community, her three brothers, Oswald (Irene), Victor (+Beatrice), and Ralph (Judy), and by her sister-in-law Annie, nieces and nephews. She was preceded in death by her parents, her brother, Herbert, and her sister, Priscilla (Jerome) Roering.