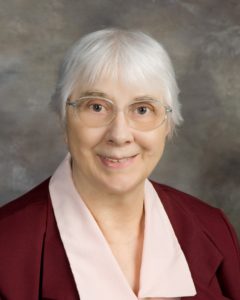 The Eucharist of Christian Burial will be celebrated at 10:30 a.m. on Tuesday, August 30, 2022, at the Sacred Heart Chapel, Saint Benedict’s Monastery, St. Joseph, Minn., for Sister Louise (Redempta) Koltes, who died on August 22, 2022, at St. Cloud Hospital, St. Cloud, Minn. Burial will be in the monastery cemetery. Funeral arrangements have been entrusted to Benson Funeral Home. Friends may call at Saint Scholastica Convent on Monday, August 29, for a Prayer Service at 1 p.m. followed by visitation until 4:15 p.m., or for a Vigil Prayer Service at 7 p.m. at Saint Benedict’s Monastery. Visitation continues at 9 a.m. until the time of the funeral on Tuesday, August 30.

Louise Koltes was born August 16, 1935, to John and Magdaline (Ahles) Koltes in Maine Prairie Township, north of Kimball, Minn., the oldest in her family of four brothers and five sisters. She attended Maine Prairie District School for three years, graduated from Holy Cross Grade School in Marty (Pearl Lake) in 1948, attended Kimball High School for three years, and graduated from Saint Benedict’s High School in St. Joseph. On September 3, 1952, she entered Saint Benedict’s Monastery, was received into the novitiate as Sister Redempta on June 17, 1953, made first monastic profession on December 19, 1954, and perpetual monastic profession July 11, 1958. S. Louise reverted to her baptismal name in 1969. She celebrated her Golden Jubilee in 2004 and 60th Jubilee in 2014.

A graduate of the College of Saint Benedict with a B.A. degree in elementary education and a minor in history, S. Louise later earned an M.A. degree in pastoral ministry from Saint John’s School of Theology, Collegeville, Minn. She completed four units of Clinical Pastoral Education while in Marshall, Minn., and attended workshops in music, theology and Native American culture.

The education S. Louise received was evident in her ministries, which took her to several cities in Minnesota. She served as an educator, organist and/or director of music in Red Lake, Richmond, Gilman, Bluffton, Greenwald, Pearl Lake and St. Cloud, and she also taught religious education. Following 10 years in medical records at St. Cloud Hospital, S. Louise served as coordinator of liturgy, ministers of music, lectors, hospitality, Eucharistic ministers and environment for worship in Alexandria. At Marshall, she spent four years as pastoral minister of the sick and aged and director of social concerns and three years as liturgy coordinator. In Delano, S. Louise was music director at St. Joseph and St. Peter’s Churches. A move to St. Raphael’s Convent, St. Cloud, saw her serving as organist and liturgy coordinator, followed by nearly 10 years at Mother of Mercy Nursing Home, Albany, where she was involved in spiritual ministries including music and liturgy. In 2008, she moved to Saint Scholastica Convent to be the director of music and coordinator of liturgy and later served as organist and receptionist.

Louise is survived by members of her Benedictine community, her brothers, William and Stephen (Lenora), her sisters, Mary (James) Molitor, Katherine Counter, Anne Marie (Marvin) Salzer and Rosalie Culbertson, and her sisters-in-law, Sonya Koltes and Donna Koltes, as well as nieces and nephews. She was preceded in death by her parents, her brothers, Michael and John, her sister, Margaret Koltes, and her brothers-in-law, Robert Hansen, Oliver Counter, Harold Och and Bruce Culbertson.