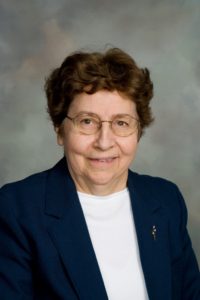 The Eucharist of Christian Burial will be celebrated at 10:30 a.m. on Tuesday, July 26, 2022, at the Sacred Heart Chapel, Saint Benedict’s Monastery, St. Joseph, Minn., for Sister Marie (Alda) Gerads, who died on July 18, 2022, at Saint Scholastica Convent, St. Cloud, Minn. Burial will be in the monastery cemetery. Funeral arrangements have been entrusted to Benson Funeral Home. Friends may call at Saint Scholastica Convent on Monday, July 25, for a Prayer Service at 1 p.m. followed by visitation until 4:15 p.m., or for a Vigil Prayer Service at 7 p.m. at Saint Benedict’s Monastery. Visitation continues at 9 a.m. until the time of the funeral on Tuesday.

Marie Gerads was born February 8, 1937, to Charles and Loretta (Harren) Gerads in Freeport, Minn., the 11th of 17 children. She attended Public School District #160 in Freeport and Holdingford High School, Holdingford, Minn., for two years before moving to Saint Benedict’s High School in St. Joseph, where she graduated. In September 1952, she entered Saint Benedict’s Monastery, was received into the novitiate as Sister Alda in June 1954, made first monastic profession on July 11, 1955, and perpetual monastic profession on July 11, 1958. She chose to revert to her baptismal name in 1969. Her Golden Jubilee on July 11, 2005, and her 60th Jubilee in 2015 were happy occasions.

Education was S. Marie’s main area of ministry. She earned a B.A. degree in elementary education with a minor in philosophy from the College of Saint Benedict, St. Joseph, and a certificate of completion of the program for the Theological Institute at St. Norbert College in DePere, Wis. She also attended St. Cloud State University, St. Cloud, and Saint John’s University, Collegeville, Minn.

Assignments as a teacher in elementary school education included Wadena, St. Anthony’s School in St. Cloud, New Munich, Long Prairie, Browerville, Cold Spring, Melrose, St. Joseph Lab School, and Freeport. While living at St. Augusta, Minn., S. Marie was a driver for the sisters at Saint Scholastica Convent. In 1997, S. Marie moved permanently to Saint Scholastica Convent where she helped with the laundry, in food service, as a receptionist, and in many areas where help was needed to care for the sisters. She also undertook a ministry of prayer for the prioress and leadership team.

Marie is survived by members of her Benedictine community, her brothers, Frank (Doreen), Herbert, Gilbert (Carol), Jake (Judy), and her sisters, Magdalen (+Dean) Schwanke, Loretta (Herbert) Thull, Dolores (+Dennis) Linn, and Bertha (+Ambrose) Herdering. She was preceded in death by her parents, her sisters, Martha and Elizabeth (+Alphonse) Bechtold, and her brothers, Martin, Jerome, Joseph, Bernard, John, and Norbert (+Mildred).

The funeral services will be livestreamed. Visit the liturgy page and scroll to the “Community Celebrations” section at the bottom of the page.