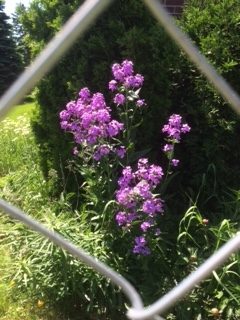 Little purple flowers are my thing. They show up like signposts along life’s way signaling all will be fine.

It was one of those days when in the middle of the muddle everything loomed larger than life. Exhausted from overthinking the decisions needing to be made, I signed up for a free flyer entitled “HOW TO MAKE A DECISION” by Emily P. Freeman.

The common sense advice upon it appeared easy enough and reinforced the fact I am obviously not alone in my inability to make one from time to time. Overthinking comes naturally and it’s not until I exhaust all possibilities that I’m free enough to make one—tentatively—or at least until I change my mind—and by that time, I’m exhausted.

While reading an important document before me, I looked up and saw a jar of handpicked purple lilacs. Perky, they peered back with poetic swag for the season. The scent was subtle and the fresh color added a touch of hope.

It was 24 hours later, to be precise, when I noticed the poetic swag was now a dainty droop in the middle of my kitchen counter. That’s when the giver of them passed by and noted the posturing of the petals and with great disappointment groaned. “Oh no, I forgot to put water in the jar!”

As I’d been busy tormenting myself with the decision-making process, I, too, had forgotten to pay attention to the basics. He promptly plucked them out of the jar, filled it up, and plopped the drooping lilacs back into the container before walking away.

With nary a word, I stared. I did not have the heart to tell him the truth. Lilacs cannot be resuscitated. Some flowers perk back up once watered, but not lilacs. And that’s when I made a decision. Right then and there, without any hesitation or overthinking, I knew what I must do.

While he was at work the next day, I dumped those babies right on out and into the wastebasket. Making my way to the lilac bush outside, and with scissors in hand, I began to cut more lilacs as replacements for those which had been laid to rest.

We shall call them, St. Lilacs. They laid down their lives so others might live. They shall live in streams of living water poured out for them—filled to overflowing. And—I suppose you already know where this is headed. “Greater love has no man than this, that he lay down his life for a friend” (John 15:13).

Granted the personification of flowers is a stretch for sainthood, but with all due dignity, no living thing can live life without Living Water.

Psalm 1:1–3 grows these thoughts a bit more. “Blessed is the man whose delight is in the law of the Lord, and on his law he meditates day and night. He is like a tree planted by streams of water that yields its fruit in its season, and its leaf does not wither.”

It looks as though He gives permission to meditate on certain things day and night—His things. Whether you are picking flowers for another, or taking time to replace them, it’s always about the other—just as He poured Himself out for others so they, too, might live. May you be blessed as you ponder these things in your heart. Amen.