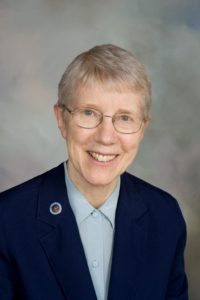 The Eucharist of Christian Burial will be celebrated at 10:30 a.m. on Monday, July 18, 2022, at the Sacred Heart Chapel, Saint Benedict’s Monastery, St. Joseph, for S. Paula (Chloe) Revier, who died on Thursday, July 14, 2022, at Saint Scholastica Convent, St. Cloud, Minn. Burial will be in the monastery cemetery. Funeral arrangements have been entrusted to Benson Funeral Home. Friends may call at Saint Scholastica Convent on Sunday, July 17, for a Prayer Service at 1 p.m., followed by visitation until 4:15 p.m., or for a Vigil Prayer Service at 7 p.m. at Saint Benedict’s Monastery. Visitation continues at 9 a.m. until the time of the funeral on Monday.

Chloe Revier was born December 16, 1933, to Lawrence and Irene (Lussenhop) Revier in Franklin, Minn., the oldest of six children. She attended Franklin Public Grade School and Waubun Consolidated High School in Waubun, Minn. On September 13, 1955, she entered Saint Benedict’s Monastery, was received into the novitiate as Sister Paul on June 19, 1956, made first monastic profession on July 11, 1957, and perpetual monastic profession on July 11, 1960. She changed the spelling of her name (to Paula) in 1989. Her Golden Jubilee on July 11, 2007, and her 60th Jubilee in 2017 were both happy occasions.

Nursing and health care were S. Paula’s primary ministries. She was a graduate of the College of Saint Benedict, earned a B.S. degree from Boston College School of Nursing, Boston, Mass., attended St. Cloud Hospital School of Nursing, St. Cloud, and was licensed as a registered nurse. She also received an MHA degree from St. Louis University, St. Louis, Mo., in hospital and health care administration.

As a health care professional, S. Paula served for many years at St. Cloud Hospital in a variety of roles, both clinical and as a senior administrator. For one year, she served as operating room supervisor at St. Benedict’s Hospital in Ogden, Utah. At Saint Benedict’s Monastery, she served in the nurses’ office and in the business office. In 1991, she became director of physical plant services at Saint Benedict’s Monastery, and in 2002, the community project manager. Later, S. Paula returned to health care ministry as a member of the monastery health services and also served in the archives and community services. She moved to Saint Scholastica Convent in 2017 where she undertook a ministry of prayer and community living.

Paula is survived by members of her Benedictine community, her brother, Larry (JoAnne), and her sisters, Faith (Joseph+) Dobrenski, Juliana (Carl) Pherson, and Bonnie (John) MacMaster, as well as nieces and nephews. She was preceded in death by her parents and an infant brother, Dean Edward.

The funeral services will be livestreamed. Visit the liturgy page and scroll to the “Community Celebrations” section at the bottom of the page.