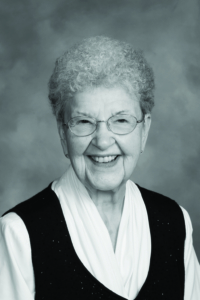 The Eucharist of Christian Burial will be celebrated at 10:30 a.m. on Saturday, May 28, 2022, at the Sacred Heart Chapel, Saint Benedict’s Monastery, St. Joseph, Minn., for Sister Linda (Valeria) Kulzer, who died on Saturday, May 21, 2022, at Saint Scholastica Convent, St. Cloud, Minn. Burial of the cremated remains will be in the monastery cemetery. Funeral arrangements have been entrusted to Benson Funeral Home. Friends may call for a Vigil Prayer Service at 7 p.m. at Saint Benedict’s Monastery. Visitation continues at 9 a.m. until the time of the funeral on Saturday, May 28. Please wear a mask when attending the wake and/or funeral.

Valeria Kulzer was born August 19, 1929, in Greenwald, Minn., the second oldest child of William and Lillian (Wiener) Kulzer. She attended District #161 grade school near Greenwald and Saint Benedict’s High School in St. Joseph. On August 28, 1943, she entered Saint Benedict’s Monastery, was received into the novitiate June 17, 1947, taking the name of Sister Linda, made first monastic profession on July 11, 1948, and perpetual monastic profession on July 11, 1951. She celebrated her Golden Jubilee in 1998 and her 60th Jubilee in 2008.

Linda received a diploma from the Diocesan Teachers’ College in St. Paul, Minn. At the College of Saint Benedict (CSB), she received a B.A. degree in English with minors in history and philosophy, and at the Catholic University of America in Washington, D.C., she earned an M.A. degree in educational psychology with a minor in elementary education. Her doctoral studies took place at the University of Syracuse in Syracuse, N.Y., where she earned a Ph.D. in education – teacher preparation with a minor in religion and culture. From the College of Mount St. Joseph in Cincinnati, Ohio, she received certificates for workshops in “Moral Development and Spirituality” and “Theology and Canon Law in Religious Life.”

Education and administration were the focus of S. Linda’s ministry. She taught grades 7 and 8 at St. Anthony’s School, St. Cloud, taught at CSB (1958–1962), was principal and dean of students at Saint Benedict’s High School (1962–1965), and returned to teaching in the education department at CSB where she served as chairperson (1972–1975) while also working on her Ph.D. S. Linda was the first personnel director for the Sisters of Saint Benedict (1975–1977), acting vice president for one year and then vice president for academic affairs at CSB for seven years. She continued as associate professor of education at CSB and served in Studium as literary arts coordinator. She retired from CSB in 1997 but continued in Studium. S. Linda also gave retreats and was involved in spiritual direction. In 2010, she moved to Saint Scholastica Convent where she served as spiritual director and assisted the community there.

Linda is survived by the sisters in her Benedictine community, her brother, Virgil (Jen), and her sisters, Dorine (+Urban) Fuchs and Janice (+Damien) Barthle, and her sister-in-law, Lois Kulzer. She was preceded in death by her parents, her brothers, Wilfred and Donald (+Caroline), and by her sister, Sister Marilyn Kulzer, OSB.

S. Linda’s memorial service will be livestreamed. Visit our liturgy page and scroll down to the “Community Celebrations” section at the bottom of the page.