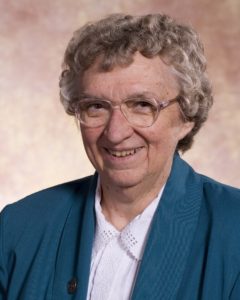 The Eucharist of Christian Burial will be celebrated at 10:30 a.m. on Friday, March 11, 2022, at Sacred Heart Chapel, Saint Benedict’s Monastery, St. Joseph, Minn., for Sister Monica (Gloria) Mai, who died on Saturday, March 5, 2022, at Saint Scholastica Convent, St. Cloud, Minn. Burial will be in the monastery cemetery. Funeral arrangements have been entrusted to Benson Funeral Home. Friends may call at Saint Scholastica Convent on Thursday, March 10, for a Prayer Service at 1 p.m., followed by visitation until 4:15 p.m., or for a Vigil Prayer Service at 7 p.m. at Saint Benedict’s Monastery. Visitation continues at 9 a.m. on March 11 until the time of the funeral.

Gloria Mai was born to Ernest and Marcella (Sherpy) Mai in Eau Claire, Wis., the second of five children. She attended Sacred Heart Grade School and St. Patrick’s Catholic Central High School in Eau Claire. On November 1, 1950, she entered Saint Bede Monastery in Eau Claire, was received into the novitiate June 20, 1951, as Sister Monica, made first monastic profession on July 11, 1952, and perpetual monastic profession on July 11, 1955. She celebrated her Golden Jubilee in 2002 and her 60th jubilee in 2012.

For several years, S. Monica served as a teacher. She taught fifth and sixth grades at St. Francis School, Ellsworth, Wis., St. Patrick’s School, Onalaska, Wis., and St. Benedict’s School, Altoona, Wis. At Regis High School, she taught business education and mathematics. While continuing to teach at Regis and Saint Bede Academy in Eau Claire, she was called to serve as treasurer at Saint Bede Monastery. In 1980, S. Monica was elected prioress of Saint Bede Monastery, a position which she occupied for total of 12 years, as well as being vice president of the Federation of Saint Benedict. After serving as prioress, she completed the corporate ministry program and was chaplain for 15 years at St. Joseph Hospital in Marshfield, Wis., and at Sacred Heart Hospital in Eau Claire.

In 2010, Saint Bede Monastery merged with Saint Benedict’s Monastery, and S. Monica took up ministry in the business office and in monastery services. In April 2013, she moved to Saint Scholastica Convent where she undertook a ministry of prayer and community living and helped Mission Advancement with “thank you” phone calls.

Monica is survived by her Benedictine community and her brothers, Richard (+Doris) and Dennis (Kathy), nieces and nephews. She was preceded in death by her parents and sisters, Mary Ann Bluem (+Marcellus) and Elaine Sheehan (+James).