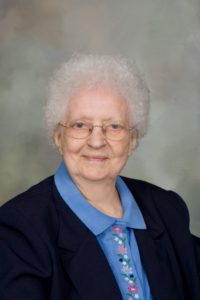 The Eucharist of Christian Burial will be celebrated at 10:30 a.m. Tuesday, January 11, 2022, at the Sacred Heart Chapel, Saint Benedict’s Monastery, St. Joseph, Minn., for Sister Colette (Darlene) Primus, who died on January 4, 2022, at Saint Scholastica Convent, St. Cloud, Minn. Burial will be in the monastery cemetery. Funeral arrangements have been entrusted to Benson Funeral Home. Friends may call at Saint Scholastica Convent on Monday, January 10, for a Prayer Service at 1 p.m., followed by visitation until 4:15 p.m., or for a Vigil Prayer Service at 7 p.m. at Saint Benedict’s Monastery. Visitation continues at 9 a.m. until the time of the funeral on Tuesday, January 11.

Darlene Primus was born December 17, 1933, to Anthony and Clotilde (Wander) Primus in Melrose, Minn., the youngest of nine children. She attended St. Boniface Grade School, Melrose High School for grade 9, and Saint Benedict’s High School, St. Joseph. Darlene entered Saint Benedict’s Monastery on August 22, 1948, was received into the novitiate June 20, 1951, where she received the name S. Colette, made first monastic profession on July 11, 1952, and perpetual monastic profession July 11, 1955. She celebrated her Golden Jubilee in 2002 and her 60th Jubilee in 2012.

Her qualifications and training in education were put to good use in her ministry. S. Colette served in several cities in Minnesota: as teacher and/or principal at St. Peter’s School in St. Cloud, in Hutchinson, Urbank, Albany, St. Augusta, and Lastrup. She served in library management and/or as media consultant for the Diocese of St. Cloud at St. Augustine’s School in St. Cloud, St. Joseph Lab School in St. Joseph, St. Anthony’s Grade School and John XXIII in St. Cloud, and in Pierz. A talented artisan, S. Colette also worked with the monastery’s Monastic Enterprises and served in the Whitby Gift Shop at Saint Benedict’s Monastery and in the gift shop at Saint Scholastica Convent. From 1999 to 2007, S. Colette lived in the Welcoming House at Saint Benedict’s Monastery, supporting women in the early stages of exploring a vocation.  She also worked as a board member and team participant of St. Cloud National Marriage Encounter for many years. She moved to Saint Scholastica Convent in 2012.

Colette is survived by members of her Benedictine community, nieces and nephews. She was preceded in death by her parents, her brothers, Donald (+Lois), Brother George, OSB, LeRoy (+Ruth) and James (+Florence; +Bernice), and by her sisters, Verona (+Erwin) Meyer, Lorraine (+Joseph) Revermann, Mae Rose (+Ralph) Baltes and Mary Ann (+Howard) Hinnerichs.