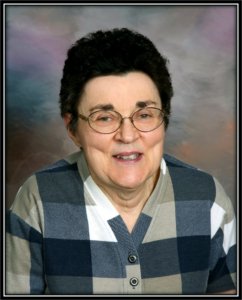 The Eucharist of Christian Burial will be celebrated at 10:30 a.m. on Saturday, November 6, 2021, at the Sacred Heart Chapel, Saint Benedict’s Monastery, St. Joseph, Minn., for Sister Hilda (Yvette) Keller, who died on October 31, 2021, at Saint Benedict’s Senior Community, St. Cloud, Minn. Burial of the cremated remains will be in the monastery cemetery. Funeral arrangements have been entrusted to Benson Funeral Home. Friends may call at Saint Scholastica Convent on Friday, November 5, for a Prayer Service at 1 p.m. followed by visitation until 4:15 p.m., or for a Vigil Prayer Service at 7 p.m. at Saint Benedict’s Monastery. Visitation continues on Saturday, November 6, at 9 a.m. until the time of the funeral.

Hilda graduated in 1963 with a B.A. in Latin with minors in English and philosophy from the College of Saint Benedict, St. Joseph. She continued her studies at the College of St. Thomas and St. Catherine University, St. Paul, Minn., and at St. Cloud State University where she completed her degree in English. She did graduate study at Saint John’s University in Collegeville, Minn., receiving an M.A. in theology on May 23, 1982.

For many years, S. Hilda served as a teacher despite having multiple sclerosis for more than 50 years. She taught elementary grades at Sacred Heart, Sauk Rapids, Minn., and St. Augustine’s, St. Cloud, and then moved into secondary education, teaching English, Latin and religion at Pierz Memorial High School, Pierz, Minn., St. Boniface High School, Cold Spring, Minn., San Benito, Puerto Rico, Cathedral High School, St. Cloud, Muroran Catholic High School, Muroran, Japan, Holy Trinity High School, Winsted, Minn., De LaSalle High School, Minneapolis, Minn., and Bethlehem Academy, Faribault, Minn. In 1984, S. Hilda moved to Saint Benedict’s Monastery where she worked in the library and held reading classes for the sisters there, as well as at Saint Raphael’s Convent and Saint Scholastica Convent. Four years later, coordinating reading classes was her full-time work along with being assistant sacristan. In 1990, she served as receptionist and continued her short story classes for the sisters at Saint Scholastica. For three years, she wrote reflections for the Liturgical Press at Saint John’s University and worked in Studium at Saint Benedict’s Monastery. S. Hilda moved to Saint Scholastica Convent in 2000 and taught English to the Korean guest sisters, read to sisters and continued her life of prayer and community living. As her health declined, she needed more skilled care and moved to Saint Benedict’s Senior Community in 2017.

Hilda is survived by her Benedictine community and one brother, James (Kenneth). She was preceded in death by six brothers, Richard, William, David, Charles, Robert, and a baby boy, and two sisters, Sister Petra (Margaret), SSS, and Patricia Johnston.