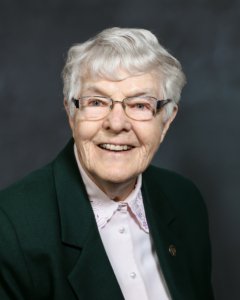 The Eucharist of Christian Burial will be celebrated at 10:30 a.m. on Friday, October 15, 2021, at the Sacred Heart Chapel, Saint Benedict’s Monastery, St. Joseph, Minn., for Sister Phyllis (Dunstan) Plantenberg, who died on October 10, 2021, at Saint Scholastica Convent, St. Cloud., Minn. Burial will be in the monastery cemetery. Funeral arrangements have been entrusted to Benson Funeral Home. Friends may call at Saint Scholastica Convent on Thursday, October 14, for a Prayer Service at 1 p.m., followed by visitation until 4:15 p.m., or for a Vigil Prayer Service at 7 p.m. at Saint Benedict’s Monastery. Visitation continues at 9 a.m. until the time of the funeral on Friday, October 15.

Born February 27, 1926, to Bernard and Evelyn (Thompson) Plantenberg in St. Cloud, Phyllis was the third of six children. She entered Saint Benedict’s Monastery on September 3, 1948, was received into the novitiate June 15, 1949, as Sister Dunstan, made first monastic profession on July 11, 1950, and perpetual monastic profession on July 11, 1953. In 1984, she reverted to her baptismal name. She celebrated her Golden Jubilee in 2000 and her Diamond Jubilee in 2010.

A passionate educator, S. Phyllis served in high school science at Saint Benedict’s High School in St. Joseph, St. Boniface High School in Cold Spring, Minn., and later at the College of Saint Benedict/Saint John’s University. Most of her classes were taught at Saint John’s University. She was chairperson of the biology department (1978–1985) and spent a semester (1985–1986) on sabbatical at University of Hawaii, Honolulu, Hawaii. S. Phyllis remained as a member the faculty of CSB until retiring in August of 1996.

Time spent at Genesis Farm in New Jersey gave her a background to develop the Common Ground project at Saint Benedict’s Monastery, which provided fresh, chemical-free vegetables and built community. In 1995, S. Phyllis became director of Common Ground and was also food production consultant. A woman who was deeply involved in community endeavors of all kinds, S. Phyllis was hostess for the Benedictine Life Experience, a member of the World Justice/New Jubilee Committee, Minnesota Land Trust, and Healthy Community Partners. After retiring from CSB in 1996, she was property manager of Saint Benedict’s Monastery, as well as continuing her work with Common Ground and ensuring that the 26 acres of oak savannah at Saint Scholastica Convent were monitored and protected forever. She also co-founded the St. Joseph’s Farmers Market, reintroduced beekeeping at Saint Benedict’s Monastery, and there are many children who will remember her pumpkin gardens.

Phyllis is survived by her Benedictine community, a sister, Elizabeth (Betty) Wolney, and many nieces and nephews. In addition to her parents, she was preceded in death by brothers, Bernard, Donald and Paul, and her sister, Patricia Leisenheimer.

If you are unable to join us in person, you can join us via livestream. Visit the liturgy page of our website and scroll down to the Community Celebrations section.