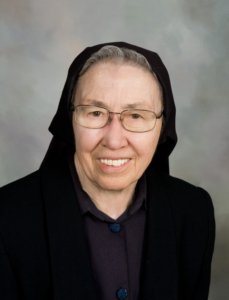 Lorraine Arceneau was born December 13, 1930, in St. Martin, Minn., the third child of Daniel and Catherine (Ehresmann) Arceneau. She had three brothers and four sisters. She attended District #125 School and received her high school grade equivalency from St. Cloud Area Vocational Technical High School in St. Cloud. Lorraine entered Saint Benedict’s Monastery on September 18, 1955, was received into the novitiate as Sister Modesta on June 19, 1956, made first monastic profession on July 11, 1957, and perpetual monastic profession on July 11, 1960. She celebrated her Golden Jubilee in 2007 and her 60th anniversary of profession in 2017.

Modesta served in food service and as a homemaker in several areas of Minnesota: Long Prairie, New Munich, Miesville, White Earth and Pierz; and in Ogden and Richfield, Utah. She also served for many years in the bakery and kitchen at Saint Benedict’s Monastery and as part of the housekeeping team. She was talented at craft work, including embroidery, sewing and quilting. In 2018, S. Modesta moved to Saint Scholastica Convent where she helped in the laundry. Wherever she served, S. Modesta was valued as a quiet, unassuming, dependable member of the team.

In addition to her Benedictine community, S. Modesta is survived by her sisters, Marcella Eibensteiner and Elizabeth (Norbert) Osendorf, her sister-in-law, Bernie Arceneau, and many nieces and nephews. She was preceded in death by her parents, her brothers, Leander, Marcellus and Valentine, her sisters, Sister Ann (Virginia) Arceneau, OSB, and Catherine Hartung, and her brothers-in-law, Leo Hartung and Frank Eibensteiner.