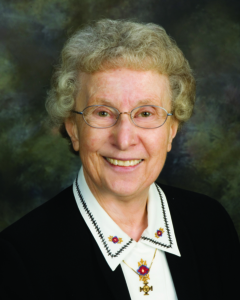 Sister Barbara (Irene) Kort died peacefully on Tuesday, March 2, 2021, at Saint Benedict’s Senior Community, St. Cloud, Minn. A private Eucharist of Christian Burial will be celebrated at Saint Benedict’s Monastery on Monday, March 8, 2021, followed by burial of the cremated remains in the monastery cemetery. Funeral arrangements have been entrusted to Benson Funeral Home.

Barbara Jean Kort was born February 4, 1939, to Manley and Ethel (Platzer) Kort in Minneapolis, Minn., the second of four daughters. She attended Annunciation Grade School and Holy Saints Academy High School in Minneapolis. On September 8, 1959, she entered Saint Benedict’s Monastery and was received into the novitiate on June 14, 1960, as Sister Irene. She made her first monastic profession on July 11, 1961, and her perpetual monastic profession on July 11, 1964. S. Barbara returned to her baptismal name in 1969 and celebrated her Golden Jubilee in July 2011.

A graduate of the College of Saint Benedict, St. Joseph, Minn., S. Barbara earned her B.A. degree in elementary education with minors in philosophy and English. She received two masters’ degrees: in elementary school administration from the University of Minnesota in Minneapolis and a master’s in theology from Saint John’s University School of Theology in Collegeville, Minn.

S. Barbara is survived by the members of her Benedictine community, her sisters, Catherine Swenson and Janet Miller, nieces, nephews and in-laws. She was preceded in death by her parents and her sister, Mary Jo Sterner.