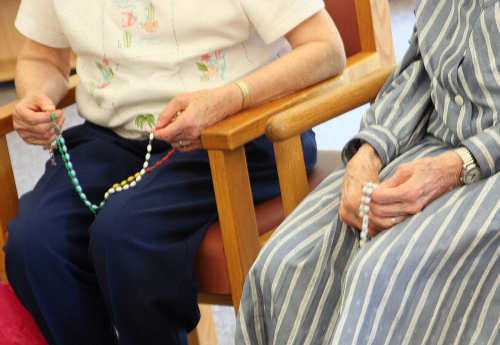 Just too much for me. I was 10 and in the fifth grade at Sacred Heart in Sauk Rapids, Minn. We had moved from Chicago after my dad’s untimely death. I was not too happy with God anyway, and to start “praying” in this mumbo jumbo didn’t make sense.

I raised my hand.

“Why do we pray words we don’t know?”

“Patty, this is how we pray in church.”

There was an audible gasp in the classroom. The sound, I remember as if it was yesterday.

My best friend poked me and gave me a look which said, “Don’t say anymore.”

Not heeding her advice, I added, “Why would God even listen to any of us if we don’t know what we are saying?”

S. Placid was patient. “When you went to Mass in Chicago, how did you pray?”

I eagerly answered and pulled a rosary out of my pocket, “This is how we prayed.” I had gone to a Dominican School in Chicago, and there was none of this Latin stuff.

During that fifth grade year, we learned more about how to pray.

“Did you know skipping rope and playing football can be prayer, too?” S. Placid began another class.

S. Placid’s words hooked me. We learned how simply offering God the whole day, whatever we did, became a prayer. I remember thinking, “Wow, is that ever a sneaky way to make everyone behave!”

As I grew into a woman, married and had babies, there was little time for traditional prayer, but I remembered S. Placid.

Work and Prayer. Ora et Labora. Benedictine values became a habit. With a whisper to God each morning, babies and diapers and cooking and cleaning became my prayer. Thank you, S. Placid, for adding to my language of prayer and blessing me with a new way of living.