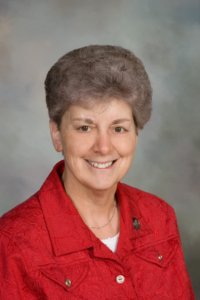 Clareen Charlotte Hennes was born February 25, 1947, to Ambrose and Mildred (Sames) Hennes in Jordan, Minn., the first in a family of four girls. She attended St. Joseph’s Public School (grades 1–6) and St. John’s Parochial School (grades 7–8) in Jordan and Saint Benedict’s High School (grades 9–12) in St. Joseph, Minn. Clareen entered Saint Benedict’s Monastery on September 10, 1965, and was received into the novitiate June 15, 1966, receiving the name Sister Kara. She made first monastic profession on July11, 1968, and perpetual monastic profession on July 11, 1973; in 2018, she celebrated her Golden Jubilee.

Kara’s gifts of compassion and intelligence were well used in a career in nursing and health care. She earned a B.S. degree in nursing from the College of Saint Teresa in Winona, Minn., and a Master of Science degree from the University of Notre Dame School of Business in Indiana. She received her credentials in patient care administration from the School of Public Health at the University of Minnesota. S. Kara served as director of Benton County Public Health Nursing Services and in a variety of positions at the St. Cloud Hospital, including as staff nurse, director of the nursing service department, vice president of nursing, vice president of nursing and patient care and as a registered nurse for homecare; she was also instrumental in developing hospice services. In 1994, the Queen of Peace Hospital in New Prague, Minn. sought her out to become the director of nursing services at the hospital.

Six years later, she was called by the monastic community to become director of finance (treasurer) for the community, a role in which she served for 16 years. During this time, she retained her nursing connection, serving on the St. Cloud Hospital Board, including a term as president. During her career, she served on several other boards: the Bylaws for MLN/Home Assembly in Minn., the board of directors for the Opportunity Training Center in St. Cloud, the board of St. Benedict’s Center in St. Cloud, the board of trustees of the Queen of Peace Hospital, New Prague, and the board of trustees at the College of Saint Benedict, St. Joseph. After stepping down as monastery treasurer, S. Kara was director of monastery health services until she moved to Saint Scholastica Convent in 2016.

S. Kara is survived by the members of her Benedictine community, her sister, Margaret (Peggy) Hennes, brother-in-law, Richard (Dick and Cheryl) Dietz, a niece and a nephew and their families. She was preceded in death by her parents and her sisters, Eileen Hennes Dietz, and Mary Elizabeth Hennes, who died in infancy.