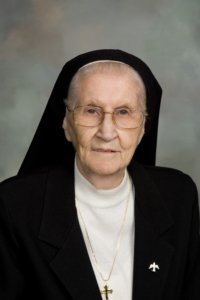 Quidella Kollmann was born August 30, 1924, to Edward and Catherine (Schleper) Kollmann in St. Cloud. She attended elementary school at St. Anthony’s in St. Cloud and St. Boniface Grade School, Cold Spring, Minn. On October 5, 1947, she entered Saint Benedict’s Monastery, was received into the novitiate on June 16, 1948, made her first monastic profession on July 11, 1949, and perpetual monastic profession on July 11, 1952. She celebrated her Golden Jubilee in 1999 and her 60th anniversary in 2009.

Many people have cause to be grateful to S. Quidella for her domestic skills. She was involved in domestic arts at Saint Raphael’s Home in St. Cloud and at St. Cloud Hospital, where she assisted Sister Glenore Riedner in setting up, and later supervising, the cafeteria-style food service for employees and guests. S. Quidella was supervisor of the laundry at St. Cloud Hospital for many years and at St. Raphael’s Convent. She moved to Saint Scholastica Convent in 1999, where she continued to assist with the laundry, in addition to many other services for the retired sisters. In her later years, she was involved in a special ministry of prayer and community living.

Quidella is survived by the sisters in her Benedictine community, and her sister, Dora Mueller. She was preceded in death by her parents, two brothers, Arthur and Jerome, and three sisters, Mary Ann Klein, Loraine Ludivig and Hermina Leither.

Hineni, Here I Am!
Scroll to top