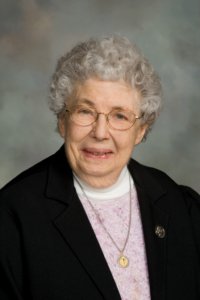 Lenore was born August 30, 1924, to William and Louise (Fuhrmann) Wollum in Eau Claire, Wis., the second youngest of eight children. She attended St. Patrick’s Elementary and St. Patrick’s High School in Eau Claire. Lenore entered Saint Benedict’s Monastery in September 1942, was received into the novitiate in 1944, made first monastic profession July 11, 1945, and perpetual monastic profession on July 11, 1948.  From June 21, 1948, she was a member of Saint Bende Monastery, Eau Claire, until August 15, 2010, when she returned to Saint Benedict’s Monastery.

For 40 years, education was at the heart of S. Dale’s ministry as a teacher of intermediate and upper grades, beginning at St. Mary’s in St. Cloud. When she moved to Saint Bede, she taught in Wisconsin at St. Thomas More, La Crosse, St. Benedict’s, Altoona, St. Patrick’s, Onalaska, St. John’s, Edgar, and as exchange teacher in Minnesota at St. Ann’s, Minneapolis, and Immaculate  Heart in St. Paul; she was also principal, teacher and superior at St. Francis, Ellsworth, Wis., and St. Mary’s, Richland Center, Wis. For 10 years, she taught English at Saint Bede Academy, Eau Claire. A change of career then saw her become director of religious education at St. Aloysius, Kaukauna, Wis., and parish minister at St. Patrick’s, Onalaska. At Saint Bede Monastery, she served as community secretary (1972–1980 and 1999–2008) and house coordinator (1999–2008). From 2009, her gifts were used wherever they were needed at the monastery. In August 2010, she moved to St. Scholastica Convent, St. Cloud, where she continued community service. S. Dale loved to write poetry and had two books of poetry published as well as poems in national and international anthologies. She loved to sing and was a beautiful cantor for prayers and liturgy.

Dale is survived by the sisters in her Benedictine community and nieces and nephews. She was preceded in death by her parents, her three brothers, William, Donald and Dale, and her four sisters, Loraine Ludwikoski, Muriel Candell, Vera White and Betty Skutley.

Sitting on the Dock
Scroll to top