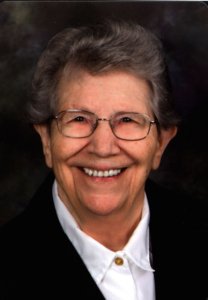 Norma Jean, the second of George and Mary (Pizzuto) Gibson’s four children, was born on December 1, 1930, in Columbia, Utah. She attended Notre Dame de Lourdes Catholic School until her sophomore year and graduated from Carbon Senior High School in Price, Utah. In 1952, she entered Saint Benedict’s Monastery in St. Joseph and was received into the novitiate on June 17, 1953, receiving the name Jean. S. Jean made her first monastic profession on July 11, 1954, and her perpetual monastic profession on July 11, 1959.

Science was S. Jean’s passion. Her science qualifications began with a degree in chemistry received from the College of Saint Benedict in 1956. She worked at the St. Cloud Hospital as an X-ray technologist for two years, then taught science and math from 1958–63 at St. Boniface High School in Cold Spring, Minn. From 1963 to 1969, S. Jean attended graduate school and earned her master’s degree and her Ph.D. in physics from the University of Iowa. She felt the highlight of her life at that time was having James Van Allen (the space scientist famous for discovering the Van Allen radiation belt around the Earth) as her major professor and being able to publish two papers with him. She went back to Minnesota to teach pre-medical classes and physics for six years at Saint John’s University in Collegeville, Minn.

In 1975, S. Jean returned to Utah, where she spent one year at the University of Utah for training in radiation therapy; she also received training at the M.D. Anderson Tumor Institute in Houston. She then went to work in the radiation therapy department as the medical physicist at the Val A. Browning Cancer Treatment Center at St. Benedict’s Hospital, Ogden, Utah, a job she held until her retirement in 1999.

Jean was one of 11 founding members of Mount Benedict Monastery, Ogden, Utah. She served as the financial director for the monastery and was also the monastery’s webmaster and computer network administrator, as well as volunteering at Birthright of Ogden as the group’s treasurer.

Jean is survived by the sisters of her Benedictine community, her sister, GeorgAnna Leseberg, and six nieces and nephews. She was preceded in death by her parents, her brother, Edward Gibson, sister, Dorothy Gentry, and two nephews.

Surprised by Joy
Scroll to top