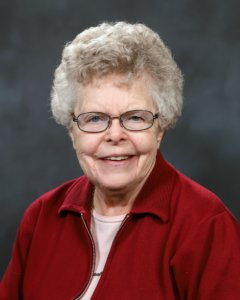 Sister Patrice (Patricia) Reed died peacefully on Monday, November 9, 2020, at Saint Scholastica Convent, St. Cloud, Minn. A private Eucharist of Christian Burial will be celebrated at Saint Benedict’s Monastery on Friday, November 13, 2020, followed by inurnment of the cremated remains in the monastery cemetery. Funeral arrangements have been entrusted to Benson Funeral Home.

Patricia was born on October 29, 1932, to Sidney and Cecilia (Nenow) Reed in Mankato, Minn., the oldest of four children. She attended Saints Peter and Paul Grade School and Good Counsel Academy in Mankato and Mankato State College for two years before transferring to the College of Saint Benedict (CSB), St. Joseph, Minn., for her final two years. She entered Saint Benedict’s Monastery on September 4, 1954, and was received into the novitiate June 15, 1955, taking the name Patrice. S. Patrice made first monastic profession on July 11, 1956, and perpetual monastic profession on July 11, 1959.

Patrice is survived by the members of her Benedictine community, her brothers, David (Shari) and Alan, OSB, her sister, Rita (Stephen) Buckley, and nieces and nephews. She was preceded in death by her parents.