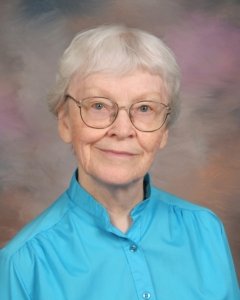 Sister Sheila (Shirley) Rausch died peacefully at Saint Benedict’s Senior Community, St. Cloud, Minn., on Tuesday, August 4, 2020. A private Eucharist of Christian Burial will be celebrated at Saint Benedict’s Monastery on August 11, 2020, followed by inurnment of the cremated remains in the monastery cemetery. Funeral arrangements have been entrusted to Benson Funeral Home.

Shirley Rausch was born November 26, 1926, to Christopher and Irene (Peaslee) Rausch in Watkins, Minn., the younger of two daughters. She attended Watkins School District #50  (grades 1–5), St. Anthony’s in Watkins (grades 6–8), Kimball High School in Kimball, Minn. (grades 9–10), and graduated from St. Francis High School in Little Falls, Minn. Shirley entered Saint Benedict’s Monastery on September 5, 1949, was received into the novitiate June 15, 1950, made first monastic profession on July 11, 1951, and perpetual monastic profession on July 11, 1954. Her golden jubilee was celebrated in 2001 and her 60th anniversary in 2011.

Teaching was at the heart of S. Sheila’s ministry. She served as a teacher at Cathedral High School in St. Cloud and at the College of Saint Benedict. She traveled several times to England taking students on study abroad programs. She retired from the college faculty in 1998 at which time she was honored by being named professor alumna. S. Sheila also served in the monastery’s development and communications office (now mission advancement) as a writer and editor, including time as editor of the monastery magazine, Benedictine Sisters and Friends. She was passionate about social justice and was active in the Bread for the World project, a member of the monastery’s World Justice/ New Jubilee committee, volunteered in ministry at the Stearns County Jail and had a prison pen pal. In 2013, S. Sheila moved to Saint Scholastica Convent and to Saint Benedict’s Senior Community in 2016, where she shared her Benedictine spirit with other residents.

Sheila is survived by the sisters in her Benedictine community, nieces and nephews. She was preceded in death by her parents and sister, Leona Marschel.

Her death was not related to COVID-19.

Learning from Henri
Scroll to top