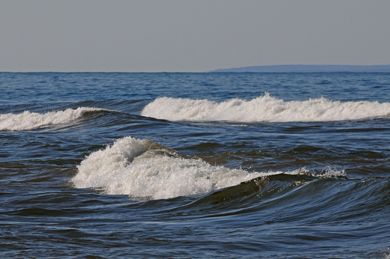 Here is a Gospel story sure to interest Minnesotans; it includes fishing, swimming and a fish fry by the lake. Jesus appeared again to his disciples by the Sea of Galilee. Simon Peter and other disciples were together. “I’m going out to fish,” Simon Peter told them, and they said, “We’ll go with you.” So they went out and got into the boat, but that night they caught nothing. Early in the morning, Jesus stood on the shore, but the disciples did not realize that it was Jesus. He called out to them, “Friends, haven’t you any fish?” “No,” they answered. He said, “Throw your net on the right side of the boat and you will find some.” When they did, they were unable to haul the net in because of the large number of fish. Then the disciple whom Jesus loved said to Peter, “It is the Lord!” As soon as Simon Peter heard him say, “It is the Lord,” he wrapped his outer garment around him (for he had taken it off) and jumped into the water. The other disciples followed in the boat, towing the net full of fish, for they were not far from shore. When they landed, they saw a fire of burning coals there with fish on it, and some bread. Jesus said to them, “Come and have breakfast.” None of the disciples dared ask him, “Who are you?” They knew it was the Lord.  This was now the third time Jesus appeared to his disciples after he was raised from the dead (John 21:1–14).