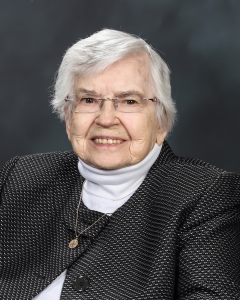 Mary Jane Slaney was born October 26, 1923, to Patrick Henry and Mary Fay (Ryan) Slaney in Melancthon Creek, Wis., the first of four children. She attended Soules Creek, Melancthon Public and St. Mary’s Elementary School in Richland Center, Wis., and Saint Benedict’s Academy in St. Joseph, Minn. She entered Saint Benedict’s Monastery in 1938 and was received into the novitiate as Sister John Marie in June 1943. She made first monastic profession in 1945 and perpetual monastic profession on July 11, 1948. She was one of the original group of sisters who volunteered to help found Saint Bede Monastery, Eau Claire, Wis., in 1948, and was a member of that community until 2010 when the Saint Bede sisters merged back with Saint Benedict’s Monastery.

Education formed the core of S. Mary Jane’s earlier years as a sister. She served both as elementary teacher and principal, teaching in St. Joseph and Breckenridge in Minnesota and in Eau Claire, Ellsworth, Altoona, Onalaska, La Crosse and Richland Center in Wisconsin. Later she turned to a second career in library and media services. As librarian, she worked in a variety of library services including at the College of Saint Scholastica, Duluth, Minn., Regis High School in Eau Claire, and at Springfield Catholic High School in Springfield, Mo. For many years, she continued to reside in Missouri, serving as pastoral minister at St. Agnes Cathedral in Springfield, working with elderly, sick, dying and homebound persons. On retirement, she continued to volunteer in related areas until her return to Minnesota in 2018, where she resided at Saint Scholastica Convent.

In addition to the sisters in her Benedictine community, S. Mary Jane is survived by many nieces and nephews. She was preceded in death by her parents, two brothers, Joseph and Thomas, and a sister, Kathleen.

Her death was not related to COVID-19.