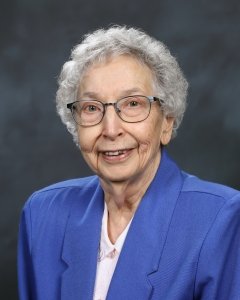 Sister Jocile (Beatrice) Robinson died peacefully at Saint Scholastica Convent, St. Cloud, Minn., on Monday, March 30, 2020. There will be a private service and burial of the cremated remains at Saint Benedict’s Monastery, St. Joseph, Minn., on Friday, April 3, 2020. A memorial Eucharist will be celebrated at a later date when S. Jocile’s Benedictine community, family and friends can be present. Funeral arrangements have been entrusted to Benson Funeral Homes.

Beatrice was born March 26, 1933, to Joseph and Florence (Rosekranz) Robinson in St. Cloud. The sixth of 12 children, she attended Stearns County District #37 grade school and Cathedral High School in St. Cloud. She entered Saint Benedict’s Monastery on September 11, 1951, and was received into the novitiate on June 18, 1952, receiving the name Jocile. S. Jocile made first monastic profession on December 20, 1953, and perpetual monastic profession on July 11, 1957. Her Golden Jubilee was celebrated in 2003 and her 60th anniversary in 2013.

Nursing was a profession to which S. Jocile had, for many years, felt called. She was blessed to follow that calling and, after qualifying, was employed as a registered nurse in Garrison Memorial Hospital in Garrison, N.D., Red Lake Community Hospital and Wadena Tri-County Hospital in Minnesota and in hospice and home care in Wadena. She also worked as a parish nurse in St. Joseph’s parish, St. Joseph, and ministered at Saint Scholastica Convent in St. Cloud. In 2015, she moved to Saint Scholastica Convent where she continued her life of prayer and community living.

In addition to the sisters in her Benedictine community, S. Jocile is survived by four brothers, Richard, Joseph, William and Donald, and three sisters, Eilene Zitur, Nellie Liepold and Florence Chwialkowski. She was preceded in death by her parents, brothers, Walter and Robert, and two brothers who died in infancy.