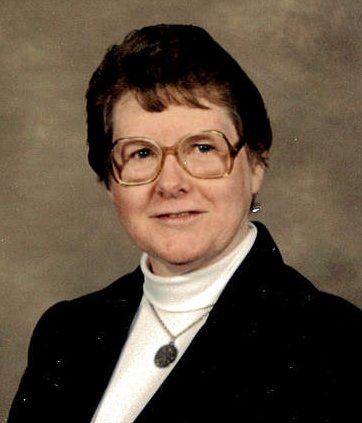 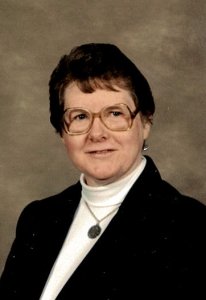 The Eucharist of Christian Burial will be celebrated at 10:30 a.m. on Wednesday, February 5, 2020, at the Sacred Heart Chapel, Saint Benedict’s Monastery, St. Joseph, Minn., for Sister Carmen (Mary) Mulcahy, who died on January 31, 2020, at Mother of Mercy Senior Living, Albany, Minn. Burial will be in the monastery cemetery. Funeral arrangements have been entrusted to Benson Funeral Home. Friends may call at Saint Scholastica Convent, St. Cloud, Minn., on Tuesday, February 4, 2020, for a Prayer Service at 1 p.m., followed by visitation until 4:15 p.m., or for a Vigil Prayer Service at 7 p.m. at Saint Benedict’s Monastery. Visitation continues at 9 a.m. until the time of the funeral on February 5.

Mary Mulcahy was born December 19, 1924, to Timothy and Sarah (McDonald) Mulcahy in rural Darlington, Wis., and was baptized into the Christian community at St. Michael’s Church in Yellowstone, Wis. She attended public schools in Georgetown District #2 in rural Darlington and Darlington High School. Mary entered Saint Benedict’s Monastery on September 9, 1944, and was received into the novitiate on June 21, 1945, taking the name Sister Carmen. On July 11, 1946, she made first monastic profession and perpetual monastic profession on July 11, 1949.

Before entering Saint Benedict’s Monastery, S. Carmen had completed two years of nursing education in Freeport, Ill. She continued her nursing education after entering monastic life, receiving a diploma from St. Cloud Hospital School of Nursing in 1950 and becoming licensed as a registered nurse. At Marquette University, Milwaukee, Wis., she earned a B.S. degree in nursing and an M.S. degree in nursing with minors in education and philosophy. At the University of Wisconsin in Madison, she earned a Ph.D. in nursing education. S. Carmen studied at the College of St. Theresa, Winona, Minn., and the University of Minnesota and undertook clinical experience at Northwestern Hospital, Minneapolis, and St. Mary’s Hospital, Rochester, Minn. She studied guidance and counseling at St. Cloud State University and was also certified in operating room (OR) nursing and rehabilitation.

Carmen was a dedicated nurse educator at the St. Cloud Hospital School of Nursing. She served as supervisor and clinical instructor in the OR, as head nurse in the recovery room and as both a classroom and clinical instructor, specializing in surgical care. For 14 years, she ministered at St. Anselm College in Manchester, N.H., where she taught nursing in the classroom and clinical areas. In 1982, S. Carmen returned to Wisconsin where she taught at the University of Wisconsin in Madison while also working toward her doctorate and caring for her sister, Sister Maureen. When S. Carmen returned to Minnesota in 1997, she taught nursing, ethics and parish nursing at the College of Saint Benedict. Following her retirement, she undertook a ministry of prayer and community living and served in the secretarial office at Saint Benedict’s Monastery. During this time, she wrote a book, Nursing Education by the Benedictine Sisters of St. Joseph, Minn.: An Account of Discipleship. In 2011, she moved to Saint Scholastica Convent in St. Cloud and later to St. Benedict’s Senior Community. Her final days were spent at Mother of Mercy Senior Living, Albany.

In addition to her Benedictine community, S. Carmen is survived by her brother George of Darlington, Wis. She was preceded in death by her parents, her sister, S. Maureen Mulcahy, OSB, and her brother, Michael.

In Loving Memory of Carmen Mulcahy, OSB
Scroll to top