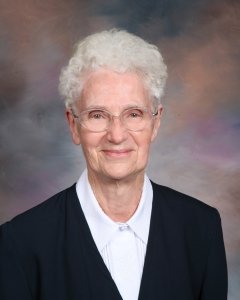 The Eucharist of Christian Burial will be celebrated at 10:30 a.m. on Tuesday, January 28, 2020, at the Sacred Heart Chapel, Saint Benedict’s Monastery, St. Joseph, Minn., for Sister Emmanuel (Audrey) Renner, who died on January 22, 2020, at Saint Scholastica Convent, St. Cloud, Minn. Burial of the cremated remains will be in the monastery cemetery. Funeral arrangements have been entrusted to Benson Funeral Home. Friends may call at Saint Scholastica Convent on Monday, January 27, for a Prayer Service at 1 p.m., followed by visitation until 4:30 p.m., or for a Vigil Prayer Service at 7 p.m. at Saint Benedict’s Monastery. Visitation continues at 9 a.m. until the time of the funeral on Tuesday, January 28.

Audrey Renner was born September 2, 1926, to Henry and Beatrice (Fuller) Renner in Nevis, Minn., the third child in a family of four girls and two boys. She received her elementary education and two years of high school education in public schools in Walker, Minn., and completed high school at the Academy of St. James in Grand Forks, N.D. Audrey entered Saint Benedict’s Monastery on September 13, 1950, and was received into the novitiate on June 20, 1951, taking the name Emmanuel. She made first monastic profession July 11, 1952, and perpetual monastic profession July 11, 1955.

Before entering Saint Benedict’s Monastery, S. Emmanuel worked at the headquarters of the National Council of Catholic Women (NCCW) in Washington, D.C. She began her education and administrative ministries by teaching at Pierz Memorial High School, Pierz, Minn., for two years, then as a teacher at CSB (1955–1956) before earning her Ph.D. In 1959, she returned to CSB to continue teaching history. She served as dean of continuing education (1975–1977), director of planning and program development (1978–1979) and was president from 1979 to 1986. She subsequently enjoyed a sabbatical in Greece and Rome before returning to CSB as professor of history. In addition, she served as advisor to the Kellogg Leadership Program, was a member of Saint John’s Board of Regents, the CSB Board of Trustees and Saint Benedict’s Monastery Council and was director of the Greco-Roman Study Abroad program at CSB.  In 1997, she became involved in research, writing the history of CSB and working with the Leadership Initiative at CSB/Saint John’s University. The following year, she was named professor emerita by then-CSB President Mary Lyons. She volunteered in the CSB archives for many years before moving to Saint Scholastica Convent, St Cloud, in 2013, where she undertook a ministry of prayer for the prioress and CSB and continued to touch people’s hearts through her gracious approach to life and prayer.

In addition to the sisters in her Benedictine community, S. Emmanuel is survived by her brother, Richard, and sisters, Beatrice Meeks, Sister Maranatha, OSB (Rosemary), and Barbara McLaughlin. She was preceded in death by her parents and a brother, Robert.