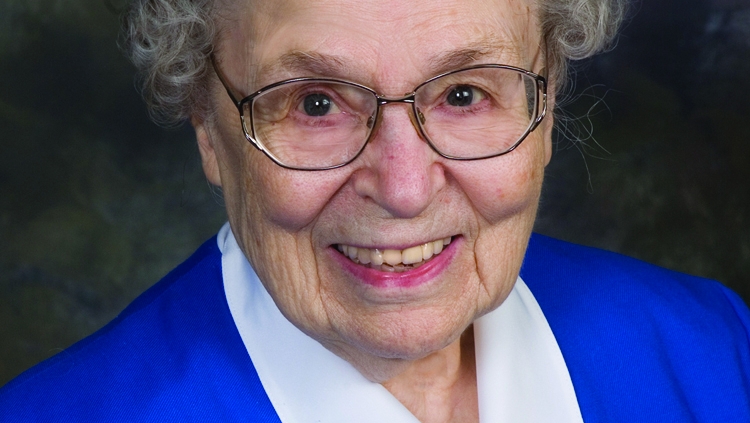 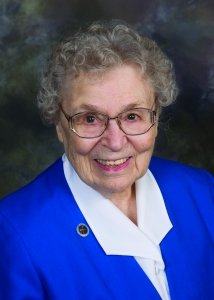 The Eucharist of Christian Burial will be celebrated at 10:30 a.m. on Wednesday, January 8, 2020, at the Sacred Heart Chapel, Saint Benedict’s Monastery, St. Joseph, Minn., for Sister Helenette (Odilia Veronica) Baltes, who died on January 2, 2020, at Saint Scholastica Convent, St. Cloud, Minn. Burial will be in the monastery cemetery. Funeral arrangements have been entrusted to Benson Funeral Home. Friends may call at Saint Scholastica Convent on Tuesday, January 7, for a Prayer Service at 1 p.m. followed by visitation until 4:15 p.m., or for a Vigil Prayer Service at 7 p.m. at Saint Benedict’s Monastery. Visitation continues at 9 a.m. until the time of the funeral on Wednesday, January 8.

Odilia Veronica Baltes was born September 11, 1915, the seventh of 13 children (seven brothers and five sisters), to Peter and Mary (Mader) Baltes in Sleepy Eye, Minn., where she attended St. Mary’s Catholic Grade School and High School. On September 5, 1933, Odilia entered Saint Benedict’s Monastery, was received into the novitiate June 18, 1935, taking the name S. Helenette, made her first monastic profession on July 11, 1936, and perpetual monastic profession on July 11, 1939. When Saint Bede Monastery, Eau Claire, Wis., became independent in 1948, S. Helenette was one of the founding members. It was there that she celebrated her Golden Jubilee in 1986 and 60th anniversary in 1996.

A graduate of the College of Saint Benedict, S. Helenette earned a B.A. degree with a major in music. She attended the Benedictine Institute of Sacred Theology at the College of Saint Benedict/Saint John’s University and the McPhail School of Music in Minneapolis. S. Helenette served in music ministry as teacher, choir director, organist and gave private piano lessons in Albany and Wayzata, Minn., Wahpeton, N.D., and Eau Claire and Ellsworth, Wis. She also worked for nine years at the Catholic Education Center in St. Paul, Minn. At Saint Bede Monastery, S. Helenette served as subprioress, community secretary, liturgist, organist and in formation as director of women in first monastic profession; she also volunteered as part-time organist at Sacred Heart Hospital in Eau Claire. In 2007, S. Helenette retired to Clairmont Nursing and Rehabilitation in Eau Claire where she resided until 2010 when Saint Bede Monastery merged with Saint Benedict’s Monastery. At this time, S. Helenette moved to Saint Scholastica Convent, St. Cloud, where she undertook a ministry of prayer and community living.

Helenette is survived by the sisters of her Benedictine community, her sister Margaret and nieces and nephews. She was preceded in death by her parents and brothers, Roman, Lawrence, Norbert, Sylvester and Joseph, and by her sisters, Clara Schroepfer, Ceil Schulte, Marie Therese Heacock and Colette Emerentia.

Pro-Life It
Scroll to top