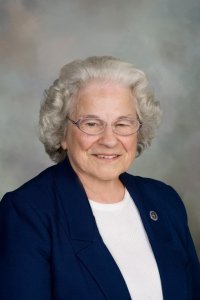 The Eucharist of Christian Burial will be celebrated at 10:30 a.m. on Friday, November 8, 2019, at the Sacred Heart Chapel, Saint Benedict’s Monastery, St. Joseph, Minn., for Sister Doris (Thomasella) Steinfeldt, who died on October 30, 2019, at Saint Scholastica Convent, St. Cloud, Minn. Burial of her cremated remains will be in the monastery cemetery. Arrangements have been entrusted to Benson Funeral Home. Friends may call at Saint Scholastica Convent on Thursday, November 7, for a Prayer Service at 1 p.m. followed by visitation until 4:15 p.m., or for a Vigil Prayer Service at 7 p.m. at Saint Benedict’s Monastery. Visitation continues at 9 a.m. on Friday, November 8, until the time of the funeral.

Doris Irene Steinfeldt was born October 18, 1925, to Frederick and Irene (Rayome) Steinfeldt in Port Edwards, Wis., the middle child of five. She attended John Edwards Grade and High School in Port Edwards. Doris entered Saint Benedict’s Monastery in September 1944, was received into the novitiate June 1945 as Sister Thomasella and made first monastic profession July 1946. On July 11, 1949, she made perpetual monastic profession as a member of the newly independent Saint Bede Monastery, Eau Claire, Wis. She celebrated her Golden Jubilee in 1996 and 60th anniversary of profession in 2006.

Sister received a B.S. degree in biology and minor in chemistry from the College of Saint Benedict, St.  Joseph. She completed an internship in medical technology at St. Cloud Hospital and was certified as a medical technologist (ASCP). At St. Cloud Hospital, she completed a radiologic technology program and later, at St. Francis Hospital School of Radiologic Technology in La Crosse, Wis., an internship of radiology which earned her certification as R.T. (R) (ARRT). She attended Brigham Young University in Provo, Utah, for teacher preparation, and received an M.S. degree in health education/health sciences with a minor in advanced radiology from State University of New York (SUNY), Buffalo, N.Y.

Her qualifications in health care led to service as a medical technologist and radiographer. S. Doris supervised the medical lab/radiology department at Garrison Hospital in Garrison, N.D., was director of medical lab/radiology department at St. Benedict’s Hospital in Durand, Wis., director of the first radiography program in the Midwest and clinical instructor for associate degrees at Chippewa Valley Technical College in Eau Claire. She also assisted elderly persons, supplied items for the gift shop (crafts, candies and jams) at Saint Bede Center, Eau Claire, and taught chemistry and physics at Regis High School, Eau Claire. Her varied talents meant that she was also able to undertake cooking and kitchen responsibilities at Mount Benedict Monastery in Ogden, Utah, 2006–2007.

Sister Doris is survived by members of her Benedictine community and her sisters, Sister Clarice (Alice) Steinfeldt, a Salvatorian sister, and Marilyn Rehberg. She was preceded in death by her parents and her brothers, Robert and Wayne.