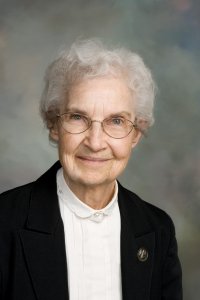 The Eucharist of Christian Burial will be celebrated at 10:30 a.m. on Thursday, October 31, 2019, at Sacred Heart Chapel, Saint Benedict’s Monastery, St. Joseph, for Sister Anne (Antone) Malerich, who died, age 93, on October 27, 2019, at Saint Scholastica Convent, St. Cloud, Minn. Burial will be in the monastery cemetery. Funeral arrangements have been entrusted to Benson Funeral Home. Friends may call at Saint Scholastica Convent on Wednesday, October 30, 2019, for a prayer service at 1 p.m. followed by visitation until 4:15 p.m., or for a Vigil Prayer Service at 7 p.m. at Saint Benedict’s Monastery. Visitation continues at 9 a.m. on October 31 until the time of the funeral.

Born September 15, 1926, to Joseph and Phyllis (Coles) Malerich in Minneapolis, Minn., Anne attended grades 1–5 at St. Peter’s School in Caledonia, Minn., and grades 6–8 at St. Mary’s School in Shakopee, Minn. She graduated from Shakopee Public High School in Shakopee, Minn. Anne entered Saint Benedict’s Monastery on September 13, 1944, was received into the novitiate on June 21, 1945, as Sister Antone, made her first monastic profession on July 11, 1946, and perpetual monastic profession on July 11, 1949. Her Golden Jubilee was celebrated in 1996 and her 60th anniversary of profession in 2006. She reverted to her baptismal name in 1968.

Anne received a B.A. degree in mathematics with minors in philosophy, chemistry and music theory at the College of Saint Benedict (CSB) in St. Joseph, Minn. At the University of Dayton in Dayton, Ohio, she earned an M.S. degree in education. She also attended the University of Oklahoma in Norman, Okla., Saint John’s University in Collegeville, Minn., the Catholic University in Ponce, Puerto Rico, Columbia University in New York and University of Notre Dame, Ind. She completed two units of Clinical Pastoral Education (CPE) at Abbot Northwestern Hospital in Minneapolis and was a certified pastoral associate and member of the National Association of Catholic Chaplains.

Teaching was S. Anne’s first ministry. She taught in elementary schools in Long Prairie, Minn., and Anaconda, Mont., and in secondary education at Saint Benedict’s High School, St. Joseph, and Cathedral High School, St. Cloud. She also served in Puerto Rico for several years as a teacher, a religious education consultant and in parish ministry. S. Anne’s ministry also saw her serve as religious education coordinator in Sauk Rapids, Minn., and as hospital chaplain at St. Benedict’s Hospital in Ogden, Utah, and St. Joseph’s Hospital in Brainerd, Minn. A woman of varied gifts, S. Anne served as staff resident at CSB, gave service in the monastery sewing room and worked with refugees in Arizona and Texas, as well as in St. Cloud where she ministered with the Hispanic community. She was involved with the Sanctuary Movement, Sister City Project and Partners Across Borders. At Saint Scholastica Convent, she served as pastoral ministry supervisor, helped with liturgy, sewing and driving and undertook a ministry of prayer.

Anne is survived by the sisters of her Benedictine community, her brother, Joseph Anthony (Tony), sister, Sister Carmel (Kathleen) Malerich, SSND, and nieces. She was preceded in death by her parents and her sister, Mary Malerich.

Do You Have A Jim in Your Life?
Scroll to top