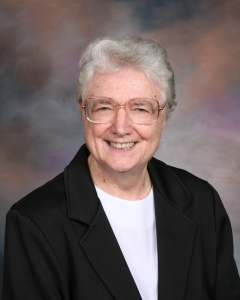 Roberta was born August 1, 1934, to Lloyd and Adeline (Manderfeld) Werner in New Ulm, Minn. She was the oldest in her family with one sister. She attended Holy Trinity Grade School and Holy Trinity High School in New Ulm. She entered Saint Benedict’s Monastery on September 14, 1958, was received into the novitiate on June 16, 1959, made first profession on July 11, 1960, and perpetual monastic profession on July 11, 1963. Her Golden Jubilee was celebrated July 11, 2010.

S. Roberta served in music ministry, music education and as organist in Pierz, Minn., and St. Joseph Parish, St. Joseph, and taught music education at the College of St. Benedict for 14 years (1967–1981), except for eight months when she studied for her master’s. She was a volunteer for music ministry in the New Ulm area and served as caretaker of her parents in their declining years. She was employed in the development office of the New Ulm Area of Catholic Schools (1995–2005). She then moved to Saint Benedict’s Monastery where she served as assistant to the oblate director. Through long months of suffering from cancer, her zest for life and her wonderful sense of humor stayed with her.

S. Roberta is survived by the members of her Benedictine community; her sister, Kathleen Pearson; her nephew, Derek Schreyer; and many cousins. She was preceded in death by her parents and brother-in-law, Paul Pearson.

Whatever Happened to Sunday?
Scroll to top