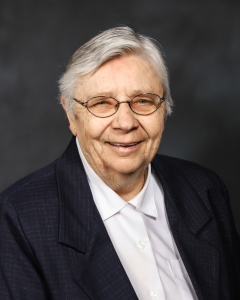 The Eucharist of Christian Burial will be celebrated at 10:30 a.m. on Monday, October 14, 2019, at the Sacred Heart Chapel, Saint Benedict’s Monastery, St. Joseph, for Sister Dominica Freund, who died on October 5, 2019, at the Saint Cloud Hospital. Burial will be in the monastery cemetery. Funeral arrangements have been entrusted to Benson Funeral Homes. Friends may call at Saint Scholastica Convent on Sunday, October 13, 2019, from 1–4:30 p.m. or for a Vigil Prayer Service at 7:30 p.m. at Saint Benedict’s Monastery. Visitation continues at 9 a.m. until the time of the funeral on Monday.

Carol Rebecca (Dominica) Freund was born September 29, 1939, to George and Anna (Rasmussen) Freund in Cando, N.D., the youngest of seven children. She attended public grade school and high school in Cando. She entered Saint Benedict’s Monastery on September 8, 1959, and was received into the novitiate June 14, 1960, as Sister Dominica. She made her first profession on July 11, 1961, and her perpetual monastic profession on July 11, 1964. S. Dominica celebrated her Golden Jubilee in July 2011.

Dominica received her B.A. degree in elementary education with a minor in music at the College of Saint Benedict, St. Joseph. She taught third through sixth grades for 39 years, teaching at St. Paul’s in St. Cloud, Minn., St. Benedict’s in White Earth, Minn., Saints John and Andrew in Meire Grove, Minn., St. Mary’s Mission in Red Lake, Minn., and St. Mary’s in St. Augusta, Minn. She then returned to the monastery in 2001, where she worked full time in the business office and transportation office. She moved to Saint Scholastica Convent in 2019.

S. Dominica is survived by her Benedictine community; her brother, Wayne, and his wife, Marguerite Freund; her brother-in-law, Dale Farbo; and sisters-in-law, Gladys Freund, Joyce Freund and many nieces and nephews. She was preceded in death by her parents; her brothers, George, Robert and John; her sisters, Sister Rose Marie Freund, OSF, and Elizabeth Farbo.