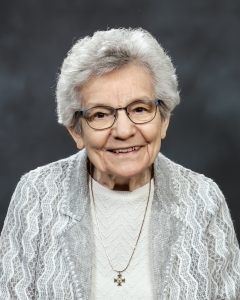 The Eucharist of Christian Burial will be celebrated at 10:30 a.m. on Wednesday, June 12, 2019, at the Sacred Heart Chapel, Saint Benedict’s Monastery, St. Joseph, Minn., for Sister Rosemary (Vincent) Huebsch, who died on June 5, 2019, at Saint Scholastica Convent, St. Cloud, Minn. Burial will be in the monastery cemetery. Arrangements have been entrusted to Benson Funeral Home. Friends may call at Saint Scholastica Convent on Tuesday, June 11, 2019, for a prayer service at 1 p.m. Visitation continues until 4:30 p.m. A Vigil Prayer Service will be held at 7 p.m. at Saint Benedict’s Monastery. Visitation continues Wednesday at 9 a.m. until the time of the funeral.

Rosemary Huebsch was born February 15, 1928, to Michael and Florence (Weis) Huebsch in Perham, Minn., the seventh of nine children. She attended St. Henry’s Grade School in Perham and Saint Benedict’s High School in St. Joseph. On August 29, 1944, she entered Saint Benedict’s Monastery, was received into the novitiate June 19, 1946, as Sister Vincent, made first monastic profession on July 11, 1947, and perpetual monastic profession on July 11, 1950. She reverted to her baptismal name in 1969.

Education was dear to S. Rosemary’s heart. She received a B.A. degree in elementary education with a minor in philosophy from the College of Saint Benedict in St. Joseph and a diploma from the Diocesan Teachers’ College in St. Paul, Minn. At the University of Minnesota, she earned an M.A. degree in elementary education (curriculum introduction with a minor in educational psychology and child development). As a teacher, S. Rosemary served in elementary education in several parishes in Minnesota: Elrosa, Pierz, St. Joseph Lab School, St. Augustine’s School in St. Cloud, Staples, Sauk Centre, Wadena and St. Mary’s in Little Falls. She was director of student teachers for the College of Saint Benedict, as well as assistant principal at St. Joseph Lab School and principal and teacher in Wadena. A second ministry of caregiving then opened for S. Rosemary. She was privileged to care for her brother, Fr. Vincent, in the last eight months of his life. The things she learned through this experience prepared her for her next ministry as pastoral care director for the elderly sisters at Saint Scholastica Convent. Subsequently, she worked in the development and communications department and as receptionist at Saint Benedict’s Monastery. In 2015, S. Rosemary retired to Saint Scholastica Convent where she undertook a ministry of prayer and community living.

Rosemary is survived by the sisters in her Benedictine community, her brother, Donald, and nieces and nephews. She was preceded in death by her parents and by brothers, Father Vincent Huebsch, Joseph, Michael, Wilfred, James, and sisters, Deloris and LaVerne Pound.

Becoming A Prophet
Scroll to top