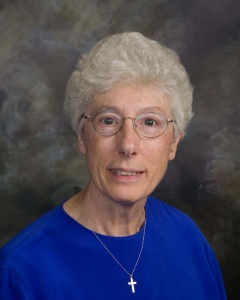 The Eucharist of Christian burial will be celebrated at 4 p.m. on Monday, June 3, 2019, at the Sacred Heart Chapel, Saint Benedict’s Monastery, St. Joseph, Minn., for Sister Theresa (Mario) Schumacher, who died on May 29, 2019, at Saint Scholastica Convent, St. Cloud, Minn. Burial will be in the monastery cemetery. Friends may call at Saint Scholastica Convent on Sunday, June 2, from 1–4:30 p.m. or for a Vigil Prayer Service at 7 p.m. at Saint Benedict’s Monastery. Visitation continues at 9 a.m. until the time of the funeral on Monday, June 3. Benson Funeral Home, St. Cloud, is managing the arrangements.

Theresa Schumacher was born June 6, 1938, to Arthur and Julia (Schmit) Schumacher in Chanhassen, Minn. She attended St. Peter Grade School in Delano, Minn., and Saint Benedict’s High School in St. Joseph. On September 2, 1952, she entered Saint Benedict’s Monastery. She was received into the novitiate as Sister Mario on June 19, 1956, made first profession on July 11, 1957, and perpetual monastic profession on July 11, 1960. She reverted to her baptismal name in April of 1989.

Initially, S. Theresa served in elementary education and music at schools in Central Minnesota: St. Anthony’s, Holy Angels and St. Paul’s Schools in St. Cloud and at Luxemburg and Lastrup and taught voice at Cathedral High School in St. Cloud. Subsequently, S. Theresa served as liturgy coordinator at CSB campus ministry, liturgy coordinator at Saint Benedict’s Monastery, novice director for the community and as liturgist for a year at St. Paul’s Monastery, St. Paul, Minn. On returning to Saint Benedict’s Monastery, she coordinated liturgy for the monastery. She gave workshops and was a consultant in the areas of liturgy and spirituality at Saint Benedict’s Monastery and at Saint Benedict Center in Madison, Wis. She also prepared liturgies for Sacred Heart Monastery in Yankton, S.D.  In 1999, she worked as assistant to the dean and rector of Benedictine University College in Nassau, Bahamas. For many years, S. Theresa gave spiritual direction, retreats and presentations, including a series of workshops in Australia (Sydney, Brisbane and Melbourne) on the psalms and Liturgy of the Hours. She also wrote homilies and book reviews, was choir director, organist and liturgy planner, and revised the community’s Liturgy of the Hours prayer books. A long-time member of the American Benedictine Academy, S. Theresa served as president from 2006–8, was a member of the Collegeville Institute for Ecumenical and Cultural Research Board and an active member of Bridgefolk, a Catholic-Mennonite group who celebrate one another’s traditions.

In 2017, S. Theresa was diagnosed with ALS. She accepted the need for care with great dignity and moved to Saint Scholastica Convent where she lived the last part of her life with great faith and graciousness.

Theresa is survived by the members of her Benedictine community, her brother Donald (Beverly), her sisters, Rose (Paul) Grengs, Julianne Neddemeyer, Alicia (David) Smith and Luella Sheridan, and brother-in-law, Ronald Peppin, as well as nieces and nephews. She was preceded in death by her parents, her brothers, Richard, Ralph and Marvin, and her sister, Millie Peppin.

Have A Fun Day!
Scroll to top