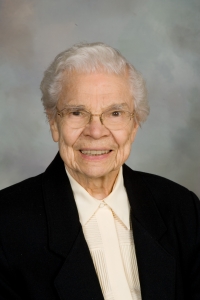 The Eucharist of Christian Burial will be celebrated at 3 p.m. on Thursday, April 4, 2019, at the Sacred Heart Chapel, Saint Benedict’s Monastery, St. Joseph, Minn., for Sister Grace (Mary Mark) Donovan who died, age 94, on March 29, 2019, at Saint Scholastica Convent, St. Cloud, Minn. Burial will be in the monastery cemetery. Arrangements have been entrusted to Benson Funeral Home. Friends may call at Saint Scholastica Convent on Wednesday, April 3, 2019, from 1–4:30 p.m., or for a Vigil Prayer Service at 7 p.m. at Saint Benedict’s Monastery. Visitation continues at 9 a.m. until the time of the funeral on Thursday, April 4, at 3 p.m.

Grace was born April 29, 1924, to Patrick and Grace (Lemieux) Donovan in Chicago, Ill., the third child in a family of five. She attended Seymour public grade and high schools in Seymour, Wis., and earned a B.S. degree at Wisconsin State Teachers’ College, LaCrosse, Wis., in history, physical education and social science. Before entering Saint Benedict’s Monastery on December 1, 1946, she taught history and physical education at the College of Saint Benedict, St. Joseph, Minn. She entered the novitiate as Sister Mary Mark on June 17, 1947, made first profession July 11, 1948, perpetual monastic profession on July 11, 1951, and celebrated her Golden and 60th anniversaries of profession in 1998 and 2008 respectively. In January 1983, she reverted to her baptismal name.

Education was a significant aspect of S. Grace’s ministry. She taught history at Cathedral High School, St. Cloud, and at the College of Saint Benedict, where she also served as dean of students and vice president of student affairs. At Saint Benedict’s Monastery, S. Grace served as community living coordinator for four years. After her year of study in gerontology, she was employed by Catholic Charities of the Diocese of St. Cloud as director of nutrition centers and services to the aged. On retiring from that post in 2006, she volunteered in the foster grandparent program at St. Augustine’s school, St. Cloud. In 2014, S. Grace moved to Saint Scholastica Convent where she was involved in a ministry of prayer for the prioress and the work of Catholic Charities.

In addition to the sisters in her Benedictine community, S. Grace is survived by her sister, Patricia Lynch, nieces and nephews. She was preceded in death by three brothers, Edward, John and Raymond.

The Hardest Thing to Do
Scroll to top