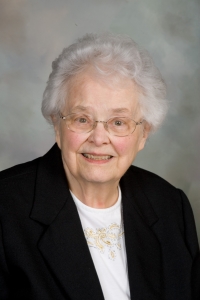 The Eucharist of Christian Burial will be celebrated at 10:30 a.m. on Friday, March 8, 2019, at the Sacred Heart Chapel, Saint Benedict’s Monastery, St. Joseph, Minn., for Sister Paula (Mary Catherine) Reiten, who died, age 94, on March 2, 2019, at Saint Scholastica Convent, St. Cloud, Minn. Burial of the cremated remains will be in the monastery cemetery. Friends may call at Saint Scholastica Convent on Thursday, March 7, 2019, from 1-4:30 p.m., or for a Vigil Prayer Service at 7 p.m. at Saint Benedict’s Monastery. Visitation continues at 9 a.m. on March 8 until the time of the funeral.

Mary Catherine Reiten was born October 26, 1924, to Nelson and Lillian (Andrews) Reiten in Petersburg, N.D., the second of 10 children. She attended Petersburg grade school and Petersburg High School in Petersburg. On September 13, 1945, she entered Saint Benedict’s Monastery, was received into the novitiate June 19, 1946, taking the name Sister Paula, made first monastic profession on July 11, 1947, and perpetual monastic profession on July 11, 1950.

A graduate of the College of Saint Benedict, S. Paula received a B.A. degree in English with minors in biology and philosophy. She earned an M.A. degree in English from the University of Minnesota, a D.Ed. degree from Columbia University, New York City, N.Y., and, in 1980, an M.A. in library science. She also studied at Marquette University, Milwaukee, Wis., University of Notre Dame, Notre Dame, Ind., University of Iowa, Iowa City, Iowa, and Fordham University, Bronx, N.Y. Her academic qualifications and fine mind were put to good use serving as an educator at Cathedral High School, St. Cloud, and at the College of Saint Benedict, St. Joseph. After completing her teaching career, S. Paula served in the library of the College of Saint Benedict and then was director of the monastic library, retiring on December 31, 2007. From 2008, S. Paula worked with memorabilia for Saint Benedict’s Monastery until she moved to Saint Scholastica Convent in 2012. Here, she carried out a ministry of prayer for the prioress and monastery leadership team and for vocations.

Accountability to Prayer
Scroll to top