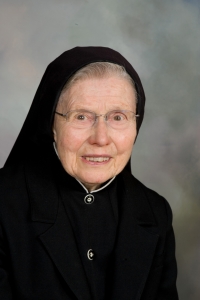 Virginia Arceneau was born November 23, 1929, to Daniel and Catherine (Ehresman) Arceneau in St. Martin, Minn. She attended District #125, a country grade school, and Saint Benedict’s High School in St. Joseph, Minn. She entered Saint Benedict’s Monastery on September 6, 1946, was received into the novitiate June 15, 1949, made first profession on July 11, 1950, and perpetual monastic profession on July 11, 1953. She celebrated her Golden Jubilee in 2000 and 60th anniversary in 2010.

S. Ann received a B.A. degree in elementary education with a minor in philosophy at the College of Saint Benedict in St. Joseph. Thus equipped, education became the heart of S. Ann’s ministry. She served in elementary education in schools throughout Central Minnesota, teaching middle grades at Elrosa, Bluffton, Gilman, Sauk Centre and Perham, and serving as both teacher and principal at Perham, New Munich and Freeport. She also served as CCD religious education coordinator at Sauk Centre and Freeport. In summer, she taught religion classes.

On her return to Saint Benedict’s Monastery, S. Ann became a driver for Saint Scholastica Convent from 1994–2009 and taught religion classes one day a week at Upsala and Elmdale. She subsequently helped with housekeeping and in the monastery kitchen. A willing worker, she was content to serve wherever she was needed. In her final years, S. Ann moved to Saint Scholastica Convent and also received care at Saint Benedict’s Senior Community.

S. Ann is survived by the sisters in her Benedictine community, her brother, Valentine, and sisters, Sister Modesta (Lorraine) Arceneau, OSB, Marcella Eibensteiner and Elizabeth Osendorf. She was preceded in death by her parents, brothers, Leander and Marcellus, and sister, Catherine Hartung.