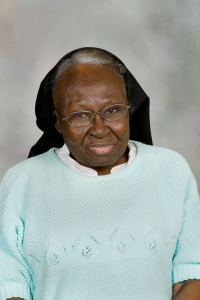 The Eucharist of Christian Burial will be celebrated at 10:30 a.m. on Thursday, November 8, 2018, at the Sacred Heart Chapel, Saint Benedict’s Monastery, St. Joseph, Minn., for S. Pauline (Lucille) Telman/Fernandes, who died, age 97, on November 4, 2018, at Saint Scholastica Convent, St. Cloud, Minn. Burial will be in the monastery cemetery. Friends may call at Saint Scholastica Convent on Wednesday, November 7, 2018, from 1 – 4:30 p.m., or for a Vigil Prayer Service at 7 p.m. at Saint Benedict’s Monastery. Visitation continues at 9 a.m. until the time of the funeral on Thursday, November 8, 2018, at 10:30 a.m.

Lucille Telman/Fernandes was born July 1, 1921, in Georgetown, British Guiana. She attended the government school in Georgetown, Guiana, and LaRoche High School in Georgetown, Guiana. She entered St. Martin de Porres Community in the Bahamas in January 1961 and was received into the novitiate there on August 6, 1961. Subsequently, she moved to Saint Benedict’s Monastery, St. Joseph, Minn., entering the novitiate on August 17, 1962. This change was approved by decree on March 19, 1963. Lucille took the name Sister Pauline as her name in religion. She made her first monastic profession July 11, 1963, perpetual monastic profession July 11, 1967, and became a U.S. citizen July 18, 1973.

Pauline worked in the card shop at Saint Benedict’s Monastery for four years and then as a homemaker in Sauk Centre, Richmond, Minn., and at Cathedral High School Convent in St. Cloud. At Saint Benedict’s Monastery, she helped care for chickens and worked in the monastery health care food service. She also worked in food service at Saint Scholastica Convent. S. Pauline brought her bright personality to a number of other ministries. She helped in the liturgy office at Saint Benedict’s Monastery and in the development office and spirituality center. She was also talented at craftwork, especially tatting. S. Pauline moved to Saint Scholastica Convent in 2016, where she undertook a ministry of community living and prayer for the prioress and leadership team.