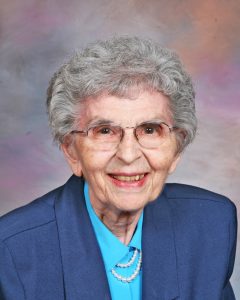 The Eucharist of Christian Burial will be celebrated at 3:30 p.m. on Friday, March 16, 2018, at the Sacred Heart Chapel, Saint Benedict’s Monastery, St. Joseph, for Sister Arles (Alice Frances) Silbernick, who died, age 96, on March 12, 2018, at Saint Scholastica Convent, St. Cloud, Minn. Burial will be in the monastery cemetery. Friends may call at Saint Scholastica Convent on Thursday, March 15, from 1-4:30 p.m., or for a Vigil Prayer Service at 7 p.m. at Saint Benedict’s Monastery. Visitation continues at 9 a.m. until the time of the funeral on Friday, March 16.

Alice Frances Silbernick was born March 14, 1921, to John A. and Mary (Deters) Silbernick in Albany, Minn., where she received her grade and high school education, attending Holy Family Grade School and Albany Public High School. On September 1, 1938, Alice entered Saint Benedict’s Monastery. She was received into the novitiate July 2, 1940, as Sister Arles, made first monastic profession on July 11, 1941, and perpetual monastic profession on July 11, 1944.

At the College of Saint Benedict, St. Joseph, Minn., S. Arles earned a B.S. degree in chemistry with minors in mathematics and physics. She then attended St. Cloud Hospital where she graduated in X-ray technology and became a registered X-ray technician. S. Arles also earned qualifications in medical record keeping at the School of Medical Records Science at Seattle University, Providence Hospital. Further education opportunities included attending the Institute on Accreditation of Hospitals in Phoenix, Ariz.; Institute on Hospital Law in Boise, Idaho; Institute for Medical Record Personnel sponsored by the American Medical Record Association; and tutorial sessions related to professional and hospital activities and the registry of radiologic technologists in Ann Arbor, Mich.

Her ministries took S. Arles to several locations. She served as an X-ray technician at St. Cloud Hospital and at St. Benedict’s Hospital, Ogden, Utah, where she also served as EEG technician. At St. Michael’s Hospital in Richfield, Utah, she was administrator and religious superior. After preparation at the Mayo Clinic, S. Arles became a pioneer in nuclear medicine at St. Cloud Hospital, setting up and supervising the radioisotope department. She also taught physics and chemistry to X-ray and anesthesia students. S. Arles later served for many years as supervisor of medical records and archivist at St. Benedict’s Hospital in Ogden, Utah, and then as a volunteer in medical records at Holy Cross Hospital in Salt Lake City, Utah. When she returned to Minnesota in 1991, she began working in the monastery business office. In 2011, S. Arles moved to Saint Scholastica Convent, where she undertook a ministry of prayer, as well as creating beautiful crochet work for Monastic Enterprises.

Arles is survived by the members of her Benedictine community and by nieces and nephews. She was preceded in death by her parents, four brothers, Frank, Norbert, Sylvester and Clarence, and by her sisters, Anna Markus and Alma Rau.

Please direct memorial gifts to the Sisters of the Order of Saint Benedict Memorial Fund.