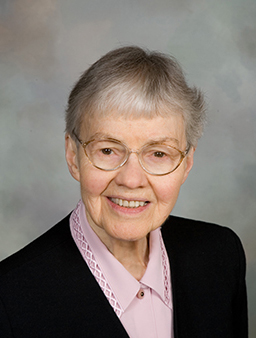 The Eucharist of Christian Burial will be celebrated at 3:30 p.m. on Thursday, February 9, 2017, at the Sacred Heart Chapel, Saint Benedict’s Monastery, St. Joseph, for Sister Olivia (Loretta) Forster who died, age 92, on February 4, 2017, at Saint Scholastica Convent in St. Cloud. Burial will be in the monastery cemetery. Friends may call at Saint Scholastica Convent on Wednesday, February 8, 2017, from 1-6 p.m., or for a Vigil Prayer Service at 7 p.m. at Saint Benedict’s Monastery. Visitation continues at 9 a.m. on Thursday, February 9, 2017, until the time of the funeral.

On August 9, 1959, S. Olivia was missioned to Japan where she served until 1980 (with the exception of a year back at Saint Benedict’s Monastery to study theology). In Japan, she taught English and was the high school principal at Muroran, Hokkaido, Japan.  From 1975-76 she also taught at Sophia University in Tokyo, Japan.

On her return to Saint Benedict’s Monastery, S. Olivia was called to serve as secretary to the sub-prioress and prioress and coordinator of the secretarial office staff. She wrote the book, Ardent Women: A History of the Federation of Saint Benedict. Liturgical press, Collegeville, Minn., employed S. Olivia as a proof reader. She also used her skills in writing and proof-reading for many years in the Office of Development and Communications where, among other things, she wrote articles for and was proof reader for the monastery’s magazine, Benedictine Sisters and Friends, and edited sisters’ obituaries and memorial cards.

S. Olivia was an avid reader and loved to walk and play card games. Her continued love for the people and culture of Japan could be seen in her interest in origami (Japanese paper folding), tea parties and the fact that she read the Bible in Japanese every day.

In addition to her Benedictine community, S. Olivia is survived by brothers: Floyd and Erhardt [Bud], and by sisters Norma Chadwick and Margaret Colbert. She was preceded in death by her parents, brothers: Elmer, Ferd, Patrick, Richard, Lawrence, and by sisters: Agnes Abraham, Alice Schantz, Elsie Forster and Patricia Holupchinski.