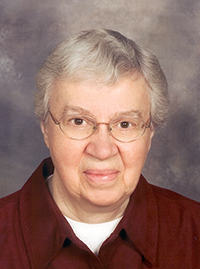 The Eucharist  of Christian Burial will be celebrated at 10:30 a.m. on Wednesday, November 23, 2016, at Sacred Heart Chapel, Saint Benedict’s Monastery, St. Joseph, for Sister Evin (Josephine) Rademacher, who died, age 90, on November 20, 2016, at Saint Scholastica Covent, St. Cloud, Minn. Burial will be in the monastery cemetery. Friends may call at Saint Scholastica Convent on Tuesday, November 22, from 1-6 p.m., or for a Vigil Prayer Service at 7 p.m. at Saint Benedict’s Monastery. Visitation continues at 9 a.m. on Wednesday, November 23, until the time of the funeral.

Josephine, the third of Martin and Anna (Dols) Rademachers’ three children, was born in Rosen, Minn.  She attended St. Joseph’s School in Rosen and Saint Benedict’s High School in St. Joseph. She entered Saint Benedict’s Monastery on August 28, 1940, and was received into the novitiate on June 21, 1945, receiving the name Evin. She made first monastic profession on July 11, 1946, and perpetual monastic profession on July 11, 1949.

A graduate of the College of Saint Benedict, St. Joseph, S. Evin earned a Bachelor of Arts degree with a major in mathematics and minors in physics and philosophy. She went on to earn an M.A. degree in mathematics from the University of Detroit, Mich., and also attended the Diocesan Teachers College in St. Paul, Minn.; University of Minnesota; Notre Dame, Ind.; Fordham University, Fordham, N.Y.; Benedictine Institute of Sacred Theology (BIST) in Collegeville, Minn.; and Saint John’s University, Collegeville, Minn.

S. Evin served as an elementary teacher at St. Joseph’s School in Minneapolis, Minn., St. Anthony’s School in St. Cloud and in secondary education at Cathedral High School in St. Cloud. She also taught at the College of Saint Benedict. In 1971 she became President of the Federation of Saint Benedict. She was elected prioress of Saint Benedict’s Monastery in 1973 and re-elected in 1977. Following completion of her second term in 1981, she moved to St. Anselm’s College in Manchester, N.H., where she served as part time instructor in mathematics, regional superior for Manchester Priory (1982-1986) and librarian.

On her return to Saint Benedict’s Monastery in 1988, S. Evin helped as a nurses’ aide at Saint Scholastica Convent, St. Cloud. She served in the monastery’s Business Office, was a member of Studium, coordinated the electronic scriptorium program, wrote scriptoral commentaries for Loose Leaf Lectionaries, made cards using pressed flowers, assisted in archives and museum and completed the digitization of Saint Benedict’s Monastery: History of First 50 Years in Minnesota. She also co-authored With Hearts Expanded, the sequel to the monastery’s early history, With Lamps Burning.

In 2011, S. Evin moved to Saint Scholastica Convent where she continued her life of prayer and community living.

S. Evin is survived by her Benedictine community, nephews and a niece. She was preceded in death by  her parents,  her brother, Isadore, and her sister, Sister Jarloth,  a Benedictine from Lacey, Wash.

https://sbm.osb.org/wp-content/uploads/migrated/sisters/evin-rademacher-color.jpg 269 200 SaintBenedictMonastery https://sbm.osb.org/wp-content/uploads/2017/02/mainlogo.jpg SaintBenedictMonastery2016-11-20 01:00:002018-02-14 20:38:11Evin (Josephine) Rademacher, OSB
For the Beauty of the EarthThe Year of Mercy has ended, but not our call to be merciful.
Scroll to top