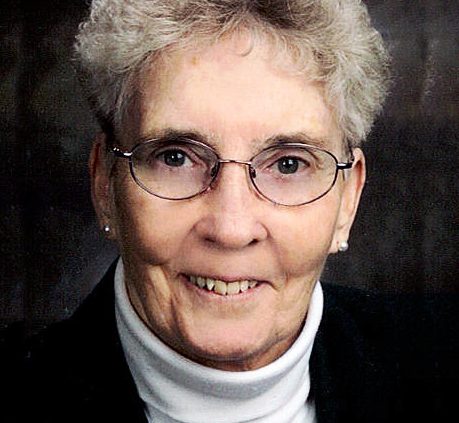 The Eucharist of Christian Burial will be celebrated at 3:30 p.m. on Thursday, October 20, 2016, at the Sacred Heart Chapel, Saint Benedict’s Monastery, St. Joseph, Minn., for Sister Shaun O’Meara , who died, age 85, on October 14, 2016, at Saint Scholastica Convent, St. Cloud, Minn. Burial will be in the monastery cemetery. Friends may call at Saint Scholastica Convent on Wednesday, October 19, from 1-6 p.m., or for a Vigil Prayer Service at 7 p.m. at Saint Benedict’s Monastery.  Visitation continues at 9 a.m. on Thursday, October 20, until the time of the funeral.

S. Shaun was born March 28, 1931, to Michael and Kathryne (Hankins) O’Meara in Kilkenny, Minn. She attended District #33 school for grades 1-7 in Cordova, Minn., and grade 8 at St. Mary’s School in LeCenter, Minn. She graduated from McKinley High School in LeCenter, Minn. S. Shaun entered Saint Benedict’s Monastery on September 13, 1952; was received into the novitiate on June 17, 1953; made first monastic profession on July 11, 1954, and perpetual monastic profession on July 11, 1957. A graduate of the College of Saint Benedict, St. Joseph, Minn., S. Shaun received a B.A. degree in sociology with a minor in history. Further study included time at St. Cloud State University and the Language School in Tokyo, Japan, where she earned a certificate in Japanese Language. She also earned an M.A. degree in American history at Marquette University, Milwaukee, Wis., an M.A. degree in theology at Saint John’s University, Collegeville, Minn., and a doctorate in ministry with a major in theology from the Pacifica School of Religion at Berkeley, Calif. In addition, S. Shaun received a certificate in spiritual direction in Tucson, Ariz.

Education, both as a student and a teacher, was central in S. Shaun’s life and ministry. She served as a high school teacher at Pierz Memorial High School in Pierz, Minn., and at Saint Benedict’s High School, St. Joseph. From 1965 to 1974, S. Shaun lived in Tokyo and Muroran, Japan, and was the regional superior for the Benedictines in Japan from 1966-1972. On her return to Saint Benedict’s Monastery, she worked as a student development facilitator at the College of Saint Benedict and as a theology teacher, including a period as Chair of the Theology Department. S. Shaun also wrote meditations for the radio, served on the Oblate Advisory Team and the Formation Team at Saint Benedict’s Monastery, worked in the monastery’s Studium, gave retreats, led workshops, wrote book reviews and gave homilies. In 2011, she moved to Saint Scholastica Convent where she undertook a ministry of prayer for the prioress and those studying theology.

S. Shaun is survived by her Benedictine community and brothers, William (Brooklyn Center, Minn.) and Richard (Owatonna, Minn.). She was preceded in death by her parents, her brothers, Walter and Lawrence, and by her sisters, Patricia Kucera and Catherine Delaney.