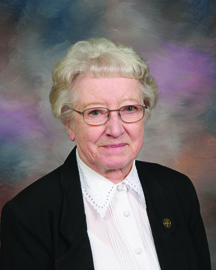 The Mass of Christian Burial will be celebrated at 10:30 a.m. on Saturday, December 1, 2012, at the Sacred Heart Chapel, Saint Benedict’s Monastery, St. Joseph, for S. Mary David (Felicia) Olheiser, who died on November 27, 2012 at Saint Scholastica Convent. Burial will be in the monastery cemetery. Friends may call at Saint Scholastica Convent on Friday, November 30, from 1-6 p.m., or for a Vigil Prayer Service at 7 p.m. at Saint Benedict’s Monastery. Visitation continues at 9 a.m. until the time of the funeral.

Felicia, the third of five children, was born on January 18, 1918, to Rudolph and Magdalen (Goetz) Olheiser in Dickinson, N. D., and attended St. Joseph’s School there. Saint Benedict’s High School in St. Joseph, Minn., followed. She entered Saint Benedict’s Monastery in 1931, was received into the novitiate on June 18, 1935, and became Sister Mary David. First monastic profession came on July 11, 1936, and perpetual profession on July 11, 1939. Her golden jubilee in 1986 and diamond in 2011 were great celebrations.

S. Mary David’s career in education began with a B.A. degree in elementary education and a minor in political science at Holy Name College, Spokane, Wash. At St. Louis (Mo.) University, she earned an MA degree in research and educational psychology, and at Boston College, Mass., an MA in educational psychology and administration. In 1976 she was awarded an M.Ch.A. degree in Church administration at the Catholic University of America, Washington, DC. Continuing studies here she earned a licentiate in canon law, J.C.L., in May, 1977, and in 1979 a J.C.D. (canon law for religious institutes and marriage tribunals). Earlier in her career she attended Diocesan Teachers’ College in St Paul, Minn.; College of Saint Benedict, St. Joseph, Minn.; Seattle University; University of Minnesota; Marquette University; and Washington Theological Union in Washington, D.C.

Education as a life work began for S. Mary David in Holy Rosary School in Tacoma, Wash., and continued in the education department of the College of Saint Benedict. She was joint chair of the department for ten years (1962-1972) and academic dean at the College of Saint Benedict for two years (1972-1974). In 1986 she was cited as Professor Emerita of Education by the Board of Trustees.

When no longer in education, S. Mary David still led a very active life. She coordinated the Sesquimillenium celebration of the birth of St. Benedict and St. Scholastica at Saint Benedict’s Monastery and St. John’s Abbey in 1980. She served on the Marriage Tribunal in the St. Cloud Diocesan Chancery from 1980 until her retirement in 1997. The marriage tribunals in the New Ulm Diocese and the Archdiocese of St. Paul also requested her services. Lectures and workshops on marriage and annulments were often on her agenda.

S. Mary David served on the College Board of Trustees as chair and executive secretary; for a time she volunteered her services at the College of Saint Benedict Archives. At Saint Benedict’s Monastery Archives she offered her expertise for research.  In 1991 Bishop Jerome Hanus, OSB, appointed her as consultant to the Carmelite Hermits of Adoration in Alexandria, Minn. From 2003-2009 she was the Director of Eremitical Life in the St. Cloud Diocese.

S. Mary David is survived by the Sisters in her Benedictine community, her brother James and nieces and nephews. She was preceded in death by brothers, David and Francis, and sisters (Ramona Ehli, Margaret Herzog, Florence Lenhardt and Mary Catherine Christie).

Please direct memorial gifts to the care of the elderly Sisters of Saint Benedict’s Monastery. Thank you.