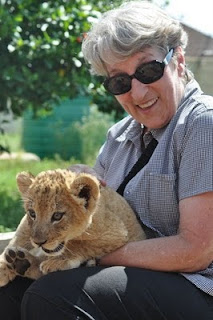 Greetings from South Africa! From seeing a dassie (rock rabbit) sunning on a boulder at the top of Table Mountain to spotting dozens of kudu (type of antelope) while driving along Route 75 towards Graaff-Reinet, it appears wildlife is still plentiful in South Africa. In order to protect and preserve these great national treasures, nature reserves, national parks and game reserves have been in place long enough so that the long-term effects can already be seen and felt.

At Addo Elephant Park, we were fortunate enough to find at least 150 elephants at the largest watering hole. It was beastly hot, driving the elephant communities to the water. It was a magnificent sight to behold and a pleasure to realize that the infrastructure is in place to assure the existence of the elephantus Africana.

On our drive to farms in the Winterberge Mountain region of the Eastern Cape, we not only saw an abundance of antelope, ostrich and blesbok grazing in the open fields, but we also drove in the mountain pastures to spot zebra, wildebeest and warthogs freely roaming the ranges alongside merino sheep and cattle raised by these Afrikaner farmers. Of course, when one is lucky enough to come across dung beetle rolling dung as food for their larvae, the only choice is to stoop down to watch the reverse action of the beetle.

In the Karoo, near Graaff-Reinet, while at the top of the Valley of Desolation, vervet monkeys and baboons showed themselves climbing and chasing one another among the amazing rock formations and ledges of this geological phenomenon situated in the Camdeboo National Park. It is a great natural wonder formed millions of years ago by weathering and erosion. 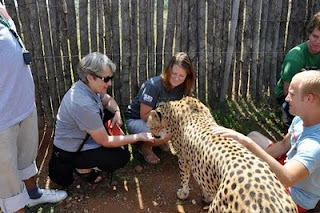 We were delighted to pet and even hold cheetah, seval cats and baby lions at the Daniell’s Cheetah Breeding Farm. Daniell Cheetah Breeding Project was started in 2001 to help in the conservation of Cheetahs, as well as to educate people to the importance of conserving this amazing species. Cheetahs can reach 45 miles per hour within 2.5 seconds.

Near Port Elizabeth, SAMREC (SA Marine Rehabilitation and Education Centre) rescues and rehabilitates penguins from oil spills and varoius injuries. SAMREC cares for all the sick and injured marine life of Algoa Bay. When we visited they had an Egyptian goose in residence, along with cormorants and oyster catchers keeping the 5 or 6 penguins company until they can be released.

So, in answer to the question, I am able to say: “Yes, thanks to the foresight and love of God’s beautiful creatures, there are wild animals in South Africa.”