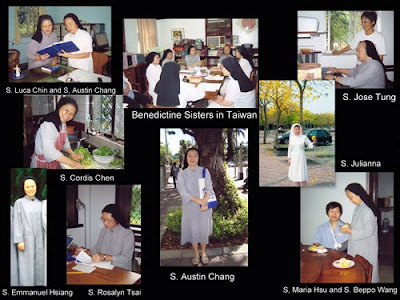 Our museum exhibit, Mission to China and Taiwan: 1930-2010 opened on Sunday, March 14. A special part of the day was welcoming four who were among the Sisters in Taiwan in the 1960s and 70s. I moved around the exhibit, listening to people’s responses. The four who had been in Taiwan had special stories to share. As one of them stood before the photo of the six pioneer Sisters to China, she said, “Sister Ronayne loved to tell us of an incident that happened on the train as they were being transported to the concentration camp in December 1941. The Japanese soldier guarding them with a pointed rifle gave it to Sister to hold for him as he stepped out to go to the bathroom!”
We looked at the imposing structure the Sisters built in 1940 on property they bought in Kaifeng. Unfortunately they lived in it less than a year before WWII broke out. This was to serve as their home and as a dispensary for the poor in the area. Eventually their goal was to found a community of Chinese Sisters. That was not to be in Kaifeng.
It was quiet around the display on the concentration camp. One women whispered, “This just gives me shivers.” One man standing there said, “Whatever convinced them to stay in China? Why didn’t they leave when they had the chance before war broke out?” I thought of an answer Sister Wibora gave many years later when asked a similar question in an oral interview. Her answer: “Once a missionary, always a missionary.” This may account for a comment made by another viewer: What was most obvious in the exhibit was the Sisters’ dedication and sacrifice. 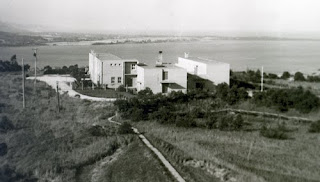 As we reached the part of the exhibit on Taiwan where the Sisters went when fleeing the communist troops in 1948, we heard a story of the “precious orphan,” one of the abandoned baby girls left at the Sisters’ children home. This baby, near death when discovered, became a favorite as she was being nursed back to life. She lives today in the U.S., in Minnesota, not far from Pat (who was Sister Jacinta, one of the Sisters who cared for her). The two have become reacquainted and reconnected. Pat is going to bring her to the monastery to see the exhibit.
The religious community that the original pioneers had hoped for in Kaifeng is a reality in Taiwan—Saint Benedict Monastery at Tanshui. Ten Sisters comprise the community, living the Benedictine way of life that was introduced into China by six Sisters from St. Joseph, Minnesota.
Come and visit the exhibit and share with us your responses.
To see video previews of the exhibit, click here.
photos: top: a collage of photos of the Sisters at St. Benedict Monastery in Tanshui, Taiwan. Below right: an areal view of the monatery in Tanshui, Taiwan.
https://sbm.osb.org/wp-content/uploads/2017/02/mainlogo.jpg 0 0 SaintBenedictMonastery https://sbm.osb.org/wp-content/uploads/2017/02/mainlogo.jpg SaintBenedictMonastery2010-03-23 15:17:002018-02-06 16:39:22Mission to China: Opening Day
Daily Meditation for March 23, 2010