One of the most exciting recent experiences my students and I have had here in Port Elizabeth, South Africa, is Cricket! Yes, we went to a local Cricket match that lasted for an evening rather than the lengthy 5 days for which Cricket is famous. The Warriors of Port Elizabeth were expected to win the game we attended on Friday night, February 20. 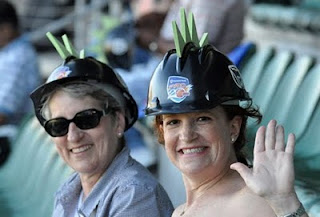 We all got tickets for a mere 45 Rand (approximately $7.00) and were able to sit wherever we liked in the stadium at St. George’s Park. As we entered we all received the Warrior hard hats you see us wearing, the green spikes indicative of the Warrior colors.
The game was as exciting as any Twins game in Minnesota, because the band played throughout the game and helped the crowd to note highlights and major plays just as at home. The fact that I had no clue what was happening in the game made little difference, because I could tell something great occurred when the crowd was on its feet yelling and whistling. The South Africans are totally devoted to this favorite game of theirs and are equally devoted to rugby and soccer. Perhaps in the major preparations for the Soccer World Cup that they are hosting in June and July of this year, they have become even more passionate than usual about their favorite sports.
Prior to the game, we did not know where to park, and so we went early—Jennifer, Dottie, and I—and found the entrance to St. George’s Park. We parked and started walking through the park when we suddenly heard a woman behind us saying, “I am following these brave women because they are walking in the park.” We asked this woman what she meant. She told us that she has worked for many years at St. George’s Hospital directly across from the park entrance, and she has never walked through the park. Local residents simply know not to do this because they know that people who have dared to walk through the park have been robbed, stabbed and even murdered.

We all were extrememly grateful to this brave woman who was kind enough to give strangers advice. We moved our car closer to the Cricket stadium and felt much safer. 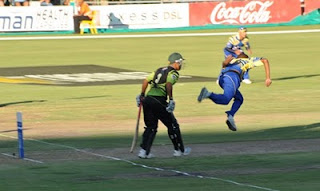 The vendors selling peanuts, hot dogs and other goodies reminded us of baseball games as well, but one major difference informed us of a specifically South African custom. Of course, at sports games, fans love to drink beer. I noticed that many fans were bringing mugs to their families and friends and that one had to go out to the vendors under the stadium seats. What I had not noticed was that the fans who had been bringing beer to their friends were all men, but when I found the Castle (a huge beer label in South Africa) Bar, I realized that I was the only woman standing in line to buy my beer! When I asked for only one beer, I was looked at askance because the usual buyer brings at least half a dozen for his friends. Later, by asking other people, we found out that the men buy the beer, even though women do drink it!

Besides cricket at St. George’s Park, a group of students and I went to see a Shakespearean play at the Manville Outdoor Theatre on March 5th. The Manville players staged Othello with expertise and excitement. The performance was well done as one student said, “I even understood the plot and usually Shakespeare is so hard for me!”

Oh, by the way, the Warriors won the game and are now in the playoffs!