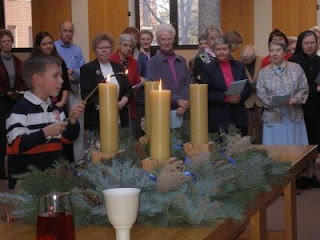 Liturgically, Advent is my favorite season. The antiphons and hymns in particular, for both Eucharist and the Liturgy of the Hours, move me more than those of other times. An air of expectancy is very strong and it is a joy-filled season. Happily, this year we come close to a full four weeks.

Often Advent gets clipped by the calendar. I want the full four weeks every year! Worst of all is the “shorting” being done by the commercial interests. It seems impossible to avoid this annual “hurry up” process. However, it could be worse . . . note the November 27th Peanuts comic strip. Lucy tells Charlie Brown that her mother is taking her downtown to see all the Christmas decorations. But Charlie tells her, “You’re too late. They’re starting to put things up for Easter.”

I recall a former chaplain on our college campus—in the 1970s—insisting that Advent must be kept in its entirety, meaning no putting up Christmas lights or decorating trees and no public concert of Christmas songs during that period. Some of us, faculty and students, joked that CSB was “the Advent capitol of Minnesota and possibly the world.” The policy (admittedly tough and not very popular) is long gone and I doubt we can halt the “shorting” of Advent. Still, we enter the season with joyous expectation, awaiting once again the glorious celebration of Christ’s birth.