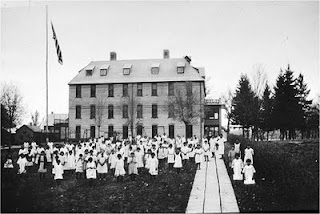 Since the 1990s the U.S. officially designates November as American Indian Heritage Month. It is meant to honor Native American culture and its imprint upon this nation. My community, the Sisters of the Order of St. Benedict, based in St. Joseph, Minn., has strong ties with the Ojibwe of Minnesota—a tribe which we lived among from the late 19th into the 21st century. We served as teachers and catechists on the White Earth, Red Lake and Mille Lacs Reservations: White Earth from 1878-1969; Red lake from 1888-2009 and Mille Lacs from 1941-2001.

As an historian, I did research on these three Indian missions and found much to admire as well as to regret while describing the decades of interaction between two cultures. Unfortunately, the hundreds of our Sisters who served on these missions did so ignorant of the Ojibwe rich traditions and values. Good will and zeal were abundant , but these did not fully compensate for lack of preparation and understanding over the many decades of missionary activity. However, my research and interviews with the Sisters and Ojibwe made clear that, in spite of cultural differences and misunderstandings, the Sisters and the Ojibwe grew to respect and over time to admire and even grow fond of one another. 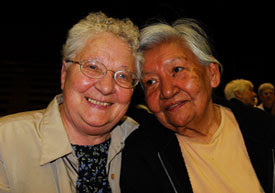 When we closed the Red Lake mission in the summer of 2009, there was a combined appreciation and farewell celebration, with the Sisters and the Red Lake people sharing many memories—mostly positive ones. I believe that the history of the interaction between Benedictines and the Ojibwe reveals a steady pattern of mutual help and friendship. Both groups found benefits in the crossing of cultural boundaries. We can hold high the memory of our long connection as we continue to honor American Indian Heritage.